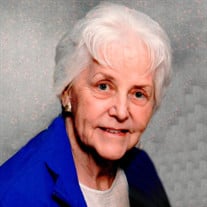 Wilma Ginn, 88, of Bluffton passed away on Saturday evening, August 5, 2017, at Bluffton Regional Medical Center. She was born on February 24, 1929 in Kokomo to Howard & Sallie (Wade) Boyer. Wilma graduated from Ervin Township High School with the class of 1947. She attended Taylor University and Asbury University and Good Samaritan Hospital in Kokomo to obtain her degree in nursing. She worked as a Licensed Registered Nurse at the Caylor-Nickel Clinic working in the Emergency Room, Orthopedics and the Recovery Room. Wilma’s nursing career spanned over 26 years, and she retired in 1988. On September 10, 1954 in Kokomo, Wilma (Boyer) and Ralph Ginn were married at Beamer United Methodist Church. Together Ralph and Wilma, along with three other couples, helped to start Hope Missionary Church as they began meeting in one of their homes. Wilma is survived by her husband of almost 63 years, Ralph of Bluffton along with two sons: Dwight “Chip” (Denise) Ginn of Bourbonnais, IL and Duane Ginn of Bluffton along with two grandsons; David Ginn & Brian (Abigail) Ginn, and a sister Georgie Brooks of Marion. She is preceded in death by a son, Daniel Wayne Ginn in April of 1960 and five sisters: Ada Lytle, Betty Boyer, Aldine Luckey, Joan Rutherford, a twin sister Velma Walker, and a brother Billy Boyer. Calling hours will be held from 4 to 8 P.M. on Thursday at the Thoma/Rich, Lemler Funeral Home in Bluffton. A funeral service will be held at 10:30 A.M on Friday (August 11, 2017) at the funeral home with calling for one hour prior to the service. Pastor Gary Aupperle will officiate. Burial will follow at Elm Grove Cemetery in Bluffton. Memorials may be made in Wilma’s memory to the Hope Missionary Church through the funeral home. Funeral arrangements have been entrusted to the care of the Thoma/Rich, Lemler Funeral Home in Bluffton. Friends can send online condolences to the family at www.thomarich.com.

The family of Wilma Ginn created this Life Tributes page to make it easy to share your memories.

Wilma Ginn, 88, of Bluffton passed away on Saturday evening,...

Send flowers to the Ginn family.