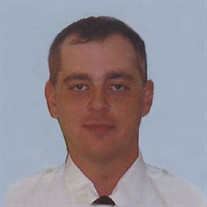 To View the video of Will's Celebration of Life service, please click on the following link. https://www.dropbox.com/s/jdkkquujl252g11/WILL%20T.%20GOSHORN%20-%20CELEBRATION%20OF%20LIFE%20-%202016.m4v?dl=0 William Tighe Goshorn, 40, of Glen Burnie, Maryland. passed away on Tuesday, March 8, 2016, at his residence. Will was born on October 11, 1975, in Bluffton, IN and was a 1994 graduate of Norwell High School. He obtained both A.S. and B.S. degrees in Aviation from Purdue University in 1998. Will had been a pilot for Mountain Air Cargo for the last six years. He is survived by his father, Everett “Bill” Goshorn, of Bluffton, Indiana, and mother, Margaret (Peggy) Warner, of Roanoke, Indiana. He also is survived by his sister, Julie (husband Gary Milante) Goshorn of Washington, D.C. and his brother, Mark Goshorn, of Fishers, Indiana, and a niece, Megan Goshorn, and nephew, Harrison Goshorn. A celebration of the life of William Tighe (Will) Goshorn took place on May 7, 2016, from 1:00 to 4:00 in the Conservatory and Courtyard of Joseph Decuis Restaurant, 191 N. Main Street, Roanoke, IN. Memorial donations be made to the Purdue Aviation Technology School. Checks may be made out to Purdue Foundation with William T. Goshorn Memorial in the memo line and may mailed to Thoma/Rich,Lemler Funeral Home, 308 W. Washington Street Bluffton, Indiana 46714.

The family of William Tighe Goshorn created this Life Tributes page to make it easy to share your memories.

To View the video of Will&#39;s Celebration of Life service, please...

Send flowers to the Goshorn family.