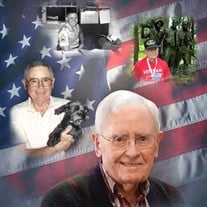 William “Bill” Draper Sawyer, 96 of Bluffton, passed away on Saturday, October 10, 2020 at Christian Care Retirement Community. He was born on February 12, 1924 in Bluffton to Dana F. & Dessie M. (Goldsberry) Sawyer. He graduated from Bluffton High School in 1942. Bill enlisted in the United States Army in 1943 and served during World War II until 1945. He continued to serve in the United States Army National Guard from 1953 to 1980. He retired from his military career on January 7, 1980, where Bill had served his country for a total of 31 years, 9 months and 12 days. Bill worked at Rosehill Dairy, Gerber Central Dairy and retired from Food Marketing in Fort Wayne after 22 years. He was a 75 year member of the American Legion Post #111 of Bluffton where he also served on the Honor Guard for many years. He was also a member and past commander of the Bluffton V. F.W. Post # 2809 in Bluffton and was a member of the former Mulberry Street Wesleyan Church. Bill and Betty A. Coffield were married on January 31, 1948 in Bluffton. They shared 44 years together before she preceded him in death on July 1, 1992. Survivors include two sons; Steve (Laura) Sawyer of Bluffton and Doug (Connie) Sawyer of Fort Wayne, and 5 grandchildren; Michelle (Mark) Brigden of Seattle, WA, Kimberly (Asbjorn) Egir of Irvine, CA., Shani Sawyer of Nashville, TN, Amy (Sawyer) Newnum of Bluffton, Brad Sawyer of Bluffton. He is also survived by great-grandchildren: Morgan Sawyer, Mackenzie Sawyer, Laney Sawyer, Gavin Sawyer, Jaiden Moore, Eleanor Egir and Emma Egir and a great-great-granddaughter, Baylee Jo Petty. Bill is preceded in death by his parents, wife, a brother Tommy F. Sawyer, a great-grandson, Evan Draper Sawyer and a great-great-grandson, Parker Petty. A graveside service to celebrate Bill’s life will be held at 3:30 P.M. on Wednesday (Oct. 14, 2020) at the Fairview Cemetery in Bluffton with Dr. Bryson “Gene” Bell officiating. Military Honors will be given by the United States Army Honor Guard and the American Legion Post #111 Honor Guard. Visitation will take place from 12 Noon to 3P.M. on Wednesday (Oct. 14, 2020) at the Thoma/Rich, Lemler Funeral Home in Bluffton. Memorials may be made to the American Legion Post #111 Honor Guard through the funeral home. The safety of the family and all visitors is our utmost priority. For everyone’s safety, we ask that you practice social distancing. Masks are required for visitation and for Bill’s service at the cemetery. We appreciate your cooperation and patience. Funeral arrangements have been entrusted to the care of the Thoma/Rich, Lemler Funeral Home in Bluffton. Friends can send online condolences to the Sawyer family at www.thomarich.com.

The family of William "Bill" D. Sawyer created this Life Tributes page to make it easy to share your memories.

William “Bill” Draper Sawyer, 96 of Bluffton, passed away on...

Send flowers to the Sawyer family.