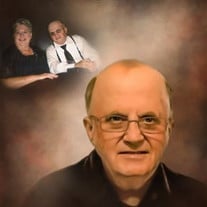 William “Bill” D. Rittenhouse, 71, of Markle passed away early Saturday morning, April 28, 2018, at I.U. Health Arnett Hospital in Lafayette, Indiana. Bill was born on September 24, 1946 in Bluffton to Marcus & Ruby (Coe) Rittenhouse. He graduated from Warren High School with the class of 1965. Bill served our country in the United States Army from 1968 to 1970, and served in the Vietnam War in 1969. Bill retired from Franklin Electric in Bluffton with 44 years of service. Bill was an active member of Warren Church of Christ. On August 16, 1968, Bill and Phyllis (Welches) were married at the Markle United Methodist Church. Survivors include his wife of 50 years, Phyllis of Markle and two children; Amy (Eddie) Stauffer of Markle and Mark (Jill) Rittenhouse of Lafayette along with 4 grandchildren; Kaylee (Jeffrey) Patterson, Reilly Stauffer, Lucas Stauffer and Owen Rittenhouse and great granddaughters Harper and Sawyer Patterson. He is also survived by two sisters, Betty (Skip) Spaulding of Evansville and Bonnie (George) Langston of Fort Wayne. Bill is preceded in death by his parents, a brother Robert “Bob,” and his wife, Mary, Rittenhouse and his granddaughter Addison Stauffer. Funeral services will be held at 10:30 on Thursday (May 3rd) at the Thoma/Rich, Lemler Funeral Home in Bluffton with Pastor Ethan Stivers officiating. Calling hours will be from 2 to 8 P.M. on Wednesday at the funeral home and for one hour prior to the service. Burial will take place at Markle Cemetery with Military Honors by the American Legion Post #111 of Bluffton and the United State Army Honor Guard. Memorials may be made to the Warren Church of Christ. Funeral arrangements have been entrusted to the care of the Thoma/Rich, Lemler Funeral Home in Bluffton. Friends can send online condolences to the family at www.thomarich.com.

The family of William "Bill" D. Rittenhouse created this Life Tributes page to make it easy to share your memories.

Send flowers to the Rittenhouse family.