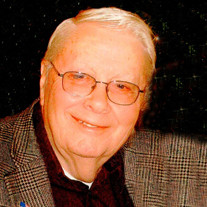 W. Allen Smith, 78, of Poneto, passed away at 6:30 a.m. Thursday, September 17, 2015, at Heritage Pointe in Warren. Allen was born on December 3, 1936 in Poneto to Howard E. & Mary (Roof) Smith. He graduated from Liberty Center High School with the class of 1954. He served his country in the United States Army from 1956-1958. He worked in the family business of Smith’s Garage & Trucking in Poneto for over 50 years. Allen was a founding lifetime member of the Poneto Volunteer Fire Department, where he served as chief for over 30 years. He was a lifetime member of the Poneto United Methodist Church. On October 25, 1959, Allen married Mary L. Brinneman at the Poneto United Methodist Church, she preceded him in death on April 10, 2012. On December 23, 2012, at Poneto United Methodist Church, he married Rebecca “Becky” (Bulger) Stone, she survives in Poneto. He is also survived by children; Len (Sue) Smith, Gary (Doreen) Smith and Cindy (Doug) Moser, Vernon Stone, all of Poneto and Jennifer (Russell) Mounsey of Keystone. He is also survived by 12 grandchildren and 7 great-grandchildren along with a sister Caroline J. (Cliff) Rush of Poneto and sisters-in-law, Mary (Kenyon) Smith-Sprunger of Poneto and Arleen Smith of Bluffton. He was preceded in death by his first wife, Mary, and two brothers, Jack and Robert “Bob” Smith. A Funeral Service for Allen will be held at 10:30 a.m. on Wednesday (September 23, 2015) at the Poneto United Methodist Church. Pastor Roy Nevil and Pastor Mike Smith will officiate. Calling hours will take place from 2 p.m. to 8 p.m. on Monday and from 2 to 8 p.m. on Tuesday at the funeral home, and for one hour prior to the service on Wednesday at the church. Burial will follow at Grove Cemetery in Poneto, where military honors will be performed by the United States Army Honor Guard and the American Legion Post #111 of Bluffton. Memorials may be made in Allen’s memory to the Poneto United Methodist Church or the Poneto Volunteer Fire Department. Funeral arrangements have been entrusted to the care of the Thoma/Rich, Lemler Funeral Home in Bluffton. Friends may send online condolences to the Smith family at www.thomarich.com.

The family of W. Allen Smith created this Life Tributes page to make it easy to share your memories.