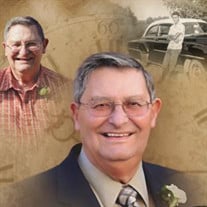 Vaughn H. Betts, 78, of Fort Wayne and a former Bluffton resident, passed away Sunday morning, April 14, 2019 at his home. He was born on March 9, 1941 in Wells County, Indiana to Earl E. & Mable Devona (Hedges) Betts. Vaughn graduated from Petroleum High School in 1958. Vaughn started out working as an owner/operator truck driver and drove for the Teamsters Union for 35 years, retiring in 2003. After retiring at the age of 62, Vaughn earned his real-estate license and sold homes for Light House Realty in Fort Wayne. On July 16, 1961 in Montpelier, Vaughn and Linda S. (Noble) Betts were married. They shared 57 years together, until she preceded him in death on September 20, 2018. Vaughn is survived by his children; David Betts of Fort Wayne, Lisa (Daren) Penwell of Newaygo, MI and Robert (Mindy) Betts of Portland, along with 6 grandchildren and 1 great-grandchild. He is also survived by a brother, Jay (Nancy) Betts of Petroleum. Vaughn is preceded in death by a son, Darrell J. Betts in 1983 and two sisters; Lena Knowles, Leela Betts and a brother Gene Betts. A service to celebrate Vaughn’s life will be held at 10:30 A.M. on Thursday, April 18, 2019 at the Thoma/Rich, Lemler Funeral Home in Bluffton with Pastor Daren Penwell, Vaughn’s son-in-law, will be officiating. Burial will follow at Rockford – Friends Cemetery in Rockford, Indiana. Calling hours will be held from 4 to 8 on Wednesday at the funeral home. Memorials may be made to the American Lung Association. Funeral arrangements have been entrusted to the care of the Thoma/Rich, Lemler Funeral Home in Bluffton. Friends can send online condolences to www.thomarich.com.

The family of Vaughn H. Betts created this Life Tributes page to make it easy to share your memories.

Send flowers to the Betts family.