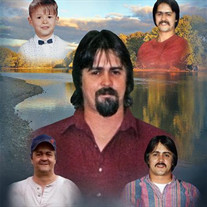 Tracy E. “Buck” Thompson, 54, of Bluffton passed away on Sunday evening, January 13, 2019, at his residence. He was born on June 7, 1964 in Bluffton, Indiana to Kenny “Doc” E. & Roxanna M. “Wahoo” (Perry) Thompson. He graduated from Norwell High School with the class of 1982. As a young boy, he played baseball and softball, winning many trophies. Buck was a truck driver for many years and enjoyed camping, boating and spending time outdoors along the river, looking for arrow heads with the grandchildren. He liked going to auctions and collecting antiques. Buck will always be remembered for his kind heart and sense of humor, and will truly be missed by many. In 1986, Tracy and Lori K. (Brodbeck) were married. She preceded him in death on December 23, 2016. Survivors include his mother Roxanna of Poneto, IN and daughters; Ashley Thompson of Fort Wayne, Amber Thompson, Kendra Thompson and Kristy Thompson all of Bluffton, Tara Disheaux of Fort Wayne, along with 12 grandchildren: Tristen & Bentley Markley, Grant & Colin Nunley, Aubrie Foss, Zach Jr., Alivia, Zavier and Aaliyah Chacon, Jane Azzara, Landon Lawhorn and Gianna Disheaux. He is preceded in death by father, Kenny “Doc” Thompson in 2016. A service to celebrate Buck’s life will be held at 4 P. M. on Saturday (January 26, 2019) at the Thoma/Rich, Lemler Funeral Home in Bluffton. Friends are invited to visit with the family from 2 P.M. to 4 P.M. on Saturday, prior to the service. Memorials may be made to help the family. Funeral arrangements have been entrusted to the care of the Thoma/Rich, Lemler Funeral Home in Bluffton. Friends can send online condolences to the family at www.thomarich.com.

The family of Tracy E. Thompson created this Life Tributes page to make it easy to share your memories.