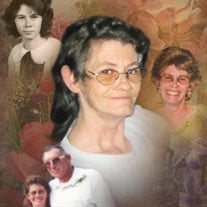 Tommie Sue Thomas, 71 of Bluffton, passed away on Friday evening, September 3, 2021, at Englewood Health & Rehab. in Fort Wayne. She was born on October 11 ,1949 in Tennessee to Millard & Mae (Jackson) Frazier. A homemaker, Tommie also worked at Pretzels Inc. and Meadowvale Health & Rehab in Bluffton and was a member of the Bluffton Church of God. On June 16, 1966 in Tennessee, Tommie and Clifford Thomas, Sr. were married, and he preceded her in death on September 21, 2003. Survivors include her children; Clifford “Cliff” (Tosha) Thomas and Melissa S. Dillman both of Bluffton and she was a loving Nana & MeMaw to 4 grandchildren; Kayla Brinneman, Madison Brinneman, Tre Nusbaumer and Kenlie Thomas, 5 great-grandchildren; Kyla, Noah, Adrienne, Aria and Robert. She is also survived by her siblings; Etta Mae Parton, Penny Stewart, Jannie Paulette Frazier, Rita Jaynes, and Walter Frazier. She is preceded in death by her parents, and her siblings; Henrietta Thomas, Freddie Frazier, Joyce Sowder, Sheila Jaynes, Murphy Frazier, Rachel Hamsher, Lunice Frazier, Millard Frazier, Jr., and Rosie Lovett. Funeral services will be held at 1 P.M. on Tuesday (Sept. 7th.) at the Thoma/Rich, Lemler Funeral Home in Bluffton with Pastor Wayne Ball officiating. Burial will follow at Fairview Cemetery in Bluffton. Visitation will take place from 11 A.M. on Tuesday to 1 P.M., the time of the funeral service. Memorials may be made in Tommie’s memory to the charity of the donor’s choice. Funeral arrangements have been entrusted to the care of the Thoma/Rich, Lemler Funeral Home in Bluffton. Friends can send online condolences to the family at www.thomarich.com.

The family of Tommie Sue Thomas created this Life Tributes page to make it easy to share your memories.

Tommie Sue Thomas, 71 of Bluffton, passed away on Friday evening,...

Send flowers to the Thomas family.