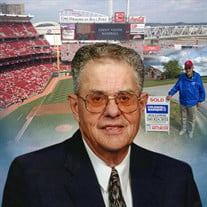 Thomas "Tom" Williams, 92, long time resident of Bluffton, passed away on Sunday, November 7, 2021 at Hoosier Village Health Center in Zionsville. Tom was born on May 8, 1929 in Richmond, IN to Robert Ball & Margaret Elizabeth (Gable) Williams. Tom graduated from Richmond High School in 1947 and then attended Earlham College. He served his country in the US Air Force from 1952-1954. Tom was blessed with three children with his wife Helen Downen, and he settled in Bluffton, Indiana. Tom managed the Bluffton Federal Land Bank, serving Adams, Wells and Jay Counties. He later became the manager of Farm Credit Association serving an eleven-county area of Northeast Indiana, retiring in 1986. He then was active in real estate and appraisals with Ellenberger Brothers and Holloway Coldwell Banker before retiring again in 2015. Tom was a longtime, faithful member of Bluffton First United Methodist Church, always generously serving throughout the years. He was a member of the Elm Grove Cemetery Association, Kiwanis and American Legion. He was an avid golfer, becoming a proud member of the Hole-in-One Club. He could often be found out on the links with family and friends. In addition to having coffee with his buddies and spending time with his family, Tom loved taking care of his yard, roses, and garden. He was a sports fan, and a loyal supporter of the Bluffton Tigers, Purdue Boilermakers, and the Cincinnati Reds. Survivors include his three daughters; Cheryl Williams of Indianapolis, Nancy (Andre) Williams-Mourao of Los Angeles, CA and Betsy (Kevin) Knoke of Fishers, four grandchildren, Grant (Hawa) Karsas of Washington, D.C., Jason (Alyssa) Karsas of Whitestown, Kendall Knoke of Bloomington and Landon Knoke of Orlando, FL, two great-grandchildren, Aiden & Siena Karsas, and a niece, Susan (Gray) James of San Antonio, TX. Tom married Helen Downen in 1953 in Vincennes, IN. She preceded him in death in 1967. He then married Rosemary Spangler in 1969 in Decatur, IN. She preceded him in death in 2002. Also preceding Tom in death were his parents and his sister, Suzanne Williams. A Celebration of Life will take place on (SATURDAY, DECEMBER 4, 2021) at 3:00 P.M. at the Thoma/Rich, Lemler Funeral Home with Pastor Sherrie Drake officiating. There will be calling prior to the service from 1:00pm – 3:00pm on (SATURDAY, DECEMBER 4, 2021) also at the funeral home. Burial will take place at Elm Grove Cemetery. Memorials may be made in Tom’s memory to Honor Flight Northeast Indiana or the Good Samaritan program at Christian Care Retirement Community and can be sent to the funeral home. Tom’s arrangements have been entrusted to the care of the Thoma/Rich, Lemler Funeral Home in Bluffton. Friends can send online condolences to the family at www.thomarich.com.

The family of Thomas "Tom" Williams created this Life Tributes page to make it easy to share your memories.

Send flowers to the Williams family.