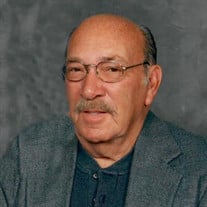 Thomas “Tom” K. Masterson, 76, of Bluffton, passed away on Monday morning, November 20, 2017, at his residence surround by his loving family. Tom was born on June 3, 1941 in Wells County, Indiana to Jason J. & Elizabeth Irene (Emerick) Masterson. He graduated from Bluffton High School in 1959 and attended some classes at Ivy Tech. He worked for 41 years at Franklin Electric in Bluffton with 32 years as a supervisor. Tom was a member of the S.A.L – American Legion Post #111 of Bluffton, Elks Lodge in Bluffton, Jaycee’s, Bluffton Pal Club and was a member of Calvary Lutheran Church in Bluffton. He enjoyed coaching youth baseball and softball leagues for over 18 years, bowling, hunting and fishing and the 14 years at Lake Tippy. He was a loyal IU Fan and his entire life was dedicated to his family. Tom and Joyce E. (James) were married on August 6, 1983 in Uniondale. He is survived by his wife Joyce along with children: Randy (Glenda) Masterson of Pennville, Roxann (Jim) Vernon of Avon Park, FL, Rea (Roger) Hudson of Bourbonnais, IL, Rebecca Masterson of Markle, Tonya (Christopher) Hoffman and Diana (Springer) Whitted, both of Fort Wayne, along with 16 grandchildren, 27 great-grandchildren. Tom is also survived by siblings: Martha Irvin of Ossian, IN, Patricia Adams of Bluffton and James Masterson of Bluffton. He is preceded in death by his parents and two brothers Gene & William “Bill” Masterson. Funeral Services will be held at 1:00 P.M. on Saturday (Nov. 25th) at the Thoma/Rich, Lemler Funeral Home in Bluffton. Pastor John Pannkuk will officiate. Calling hours will be held from 2 to 8 on Friday (Nov. 24th) at the funeral home and from 11 to 1, prior to the service on Saturday. Burial will follow at Fairview Cemetery in Bluffton. Memorials may be made to Visiting Nurse & Hospice Home or American Cancer Society. Funeral arrangements have been entrusted to the care of the Thoma/Rich, Lemler Funeral Home in Bluffton. Friends can send online condolences to the family at www.thomarich.com.

The family of Thomas "Tom" K Masterson created this Life Tributes page to make it easy to share your memories.