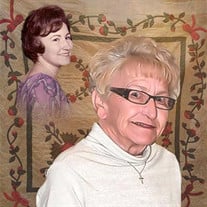 Suzette Colleen Courtney, 72, of Bluffton, passed away Thursday evening, November 29, 2018, at her residence, surrounded by her family. Suzette was born on January 11, 1946 in Fort Wayne, Indiana to William I. & Phyllis A. (Smith) Davis. She was a 1964 graduate of Fort Wayne Central High School, and grew up in Fort Wayne and moved to Bluffton in 1967. On December 15, 1967 in Fort Wayne, Suzette and Dan H. Courtney were married. A homemaker, Suzette had a passion for many years for quilting. Over the years she lovingly made many quilts for her family and friends and was a member of the Six Mile Quilters and American Legion Post #111 Auxiliary. Survivors include her husband of 51 years, Dan of Bluffton along with two daughters, Evette Violette of Fort Wayne and Ruth Courtney of Rockford, OH. and two sons, Thomas (Sherry) Brock of De Soto, MO., Nathaniel D. (Shanda) Courtney of Petroleum and six grandchildren; Chris Violette, Craig Violette, Hunter Brock, Alyssa Courtney, Maryssa Courtney and Caleb Courtney. She is also survived by a sister, Colette (David) Starks of Fort Wayne and a brother Paul Davis of CT. Suzette is preceded in death by her parents and a grandson, Zachariah Perry in 1997. Funeral Services will be held at 10:30 A.M. on Tuesday (Dec. 4th) at the Thoma/Rich, Lemler Funeral Home in Bluffton with Chaplin Chris Thurow officiating. Burial will follow at Elm Grove Cemetery in Bluffton. Calling hours will be held from 2 to 8 on Monday at the Thoma/Rich, Lemler Funeral Home and for one hour prior to the service on Tuesday. Memorials may be made to Family Lifecare of Berne, American Legion Post #111 Auxiliary of Bluffton or Donor’s choice. Funeral arrangements have been entrusted to the care of the Thoma/Rich, Lemler Funeral Home in Bluffton. Friends can send online condolences to the family at www.thomarich.com.

Suzette Colleen Courtney, 72, of Bluffton, passed away Thursday evening, November 29, 2018, at her residence, surrounded by her family. Suzette was born on January 11, 1946 in Fort Wayne, Indiana to William I. & Phyllis A. (Smith) Davis. She... View Obituary & Service Information

The family of Suzette Colleen Courtney created this Life Tributes page to make it easy to share your memories.

Send flowers to the Courtney family.