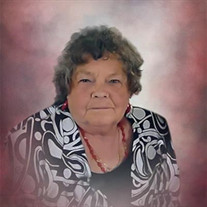 Stella Ruth Masterson, 74, of Bluffton passed away at 2:40 p.m. Monday, November 28, 2016, at Bluffton Regional Medical Center. Stella was born on August 12, 1942 in Jellico, Kentucky to Walter West & Rose (Parks) West. On May 17, 1960 in Bluffton, Stella and James “Jim” E. Masterson were married. Stella was a homemaker for many years. She cleaned many homes in the surrounding area. She volunteered at Christian Care for many years and enjoyed spending time with her family and friends. She enjoyed her flowers gardening, puzzles and playing cards, and most of all of her grandchildren. She attended many churches in the area. Survivors include her husband Jim of Bluffton along with two sons Terry (Linda) Masterson of Poneto and Doug (Marie) Masterson along with two grandchildren: D.J. (Toni) Masterson and Terra (Chad) Morris, all of Bluffton, six great-grandchildren. Stella is also survived by siblings: Donald Lee (Eunice) West of Bluffton, Charles (Donna) West of Geneva, Pauline Rothgeb of Fort Wayne, Midge (Huey) Ginter of Liberty Center, Bernice (Larry) Wine of Fort Wayne, along with many nieces and nephews. She is preceded in death by her parents, an infant daughter along with siblings: Raymond, Harold and Claude West, Ruby Mae Copeland. A service to celebrate Stella’s life will be held at 2 p.m. on Saturday (December 3, 2016) at the Thoma/Rich, Lemler Funeral Home in Bluffton, with Jeff Lemler officiating. Visitation will take place on Friday from 2 to 8 p.m. at the funeral home, and for one hour prior to the service. Burial will follow at Fairview Cemetery in Bluffton. Memorials may be made in Stella’s name to Cancer Services of Northeast Indiana. Stella’s funeral arrangements have been entrusted to the care of the Thoma/Rich, Lemler Funeral Home in Bluffton. Friends can send online condolences to the family at www.thomarich.com.

The family of Stella Ruth Masterson created this Life Tributes page to make it easy to share your memories.