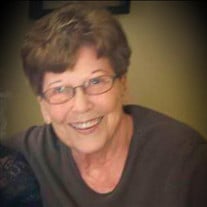 Shirley Ann Somers, 79, passed into heaven peacefully at home on Friday, March 11, 2016, with her family at her side. She was born in Wells County on July 12, 1936 to Hugh and Leona (Brown) Miller. Shirley was a direct descendant of the first settlers of Wells County, settling outside of Murray. She lived for a time in Hawaii and Maryland, and returned to Wells County to raise four children. A graduate of Bluffton High School, she was an employee of Caylor-Nickel Hospital for nearly thirty years, and was a member of the American Legion Auxiliary Post #111. Shirley was an avid gardener, decorator, cook and antique collector. She especially enjoyed vacations in Southern Indiana and spending time with their grandchildren and great-grandchildren. On July 21, 1973 in Bluffton, Shirley and James Somers were married. She is survived by her husband of forty-three years, Jim, along with their children Kim (Barbara) Satterfield and Lynne (William) Briegel of Fort Wayne, Lisa Jack of Bluffton and Eric (Rebecca) Satterfield of Zionsville. She is also survived by five grandchildren; Ron (Michelle) Robertson, Nicole (TJay) Veit, Aaron Satterfield, all of Fort Wayne, Sarah and Joshua Satterfield of Zionsville, and four great-grandchildren: Austin Davis, Gabriel Veit, Emma Veit and Jesiah Satterfield. She was preceded in death by her parents, brothers Doyle, Bobby and Marvin Miller, and sisters Joyce Miller, Diane Elzey, and Pat Johnson. Special thanks to family caregivers, Cheryl Coratti, Renae Barger, Brittany Hartman, Erin Kirschner, and Dr. Fernandes. Services will be held at Thoma-Rich Lemler Funeral Home, Bluffton at 10 a.m. on Saturday (March 19, 2016) with Rev. Poling officiating. Calling hours will be held from 2 p.m. to 8 p.m. on Friday (March 18, 2016) at the funeral home. Burial will follow at Fairview Cemetery. Preferred memorials can be made to assist Scott Elzey and payable to Professional Federal Credit Union, and given through the funeral home. Funeral arrangements have been entrusted to the care of the Thoma/Rich, Lemler Funeral Home. Friends can send online condolences to the family at www.thomarich.com.

Shirley Ann Somers, 79, passed into heaven peacefully at home on Friday, March 11, 2016, with her family at her side. She was born in Wells County on July 12, 1936 to Hugh and Leona (Brown) Miller. Shirley was a direct descendant of the first... View Obituary & Service Information

The family of Shirley A Somers created this Life Tributes page to make it easy to share your memories.

Send flowers to the Somers family.