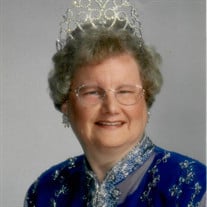 Sharon S. Thomas, 78 of Berne and a longtime rural Bluffton resident, passed away on Tuesday evening, July 28, 2020, at Swiss Village Retirement Community in Berne. Sharon was born on August 1, 1941 in South Bend, Indiana to Thorson Allen & Margarete (Miller) Howe. She graduated from Geneva High School in 1960 and retired as an inspector for EPC in Geneva in 1985. Sharon and Merle H. Thomas were married on March 15, 1985 and he preceded her in death on December 20, 2002. Sharon was a past president of the Wells County Extension Homemakers Club and was very involved in the Eastern Star – Cresent Chapter and served as Past Matron of the Eastern Star. She was also a member of the White Shrine of Jerusalem and the Daughters of the Nile, where she was a past officer and Queen in 2005. Survivors include a brother, Frank (Barbara) Howe of Berne and a granddaughter, Tamerley Thomas of Craigville, along with a stepbrother, Terry Miller of Columbia City and a step-sister, Peggy (Ted) Kunkel of Florida and a niece, Laura Jacobson of Pittsburgh, PA. Sharon is preceded in death by her parents, her husband Merle, a step-son, Thomas N. Thomas, and her step-mother, Raedeen Howe. Funeral services will be held at 12 Noon on Tuesday (August 4, 2020) at the Thoma/Rich, Lemler Funeral Home in Bluffton with Pastor Dave Cox officiating. An Eastern Star Memorial Service will also be part of Sharon’s funeral service. Burial will follow at the Stahl Cemetery south of Bluffton, just next to where Merle and Sharon lived for many years. Calling hours will be held from 10 A.M. to 12 Noon on Tuesday, prior to the funeral service at the funeral home. Memorials may be made to the Shriners Children Hospital. The safety of the family and all visitors is our utmost priority. For everyone’s safety, we ask that you practice social distancing. Masks are required for visitation and for Sharon’s service at the funeral home. We appreciate your cooperation and patience. Funeral arrangements have been entrusted to the care of the Thoma/Rich, Lemler Funeral Home in Bluffton. Friends can send online condolences to the family at www.thomarich.com.

The family of Sharon S. Thomas created this Life Tributes page to make it easy to share your memories.

Send flowers to the Thomas family.