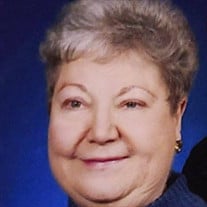 Sharon “Sherry” June (Osborn) Merrill, age 80, went to heaven to be with Jesus on June 18, 2018. Born on June 24,1937, in Bluffton, Indiana, Sharon was the first-born child of Herman and Golda (First) Osborn. She grew up on a farm with long days of helping garden, paint, milk cows, and cut weeds out of fields of certified seeds. The Osborn family really had fun together with vacations to camping in lower Michigan, where the Osborns owned a farm covered with Christmas trees, lots of sand, and a ten-acre lake. Any spare minutes found Sherry pursuing her favorite pastime: reading. After graduating from Chester Center High School in 1955, she earned a Bachelor of Science in Elementary Education at Taylor University in Upland, Indiana, in 1959, followed in 1964 by her Master of Science in Elementary Education from Purdue University at West Lafayette, Indiana. Sherry taught third grade for six years at Jefferson Elementary School in Kokomo, Indiana. A mutual friend introduced Sherry to Stan Merrill. They married on June 21,1964, in a small country church, Blanche Chapel, near her parents’ home. They made their home in Kokomo, Indiana. Sherry became a full-time homemaker and was the mother of two sons, Tony and Eric. Always busy, her activities included being a Sunday School teacher at Grace United Methodist Church, den mother for Cub Scouts, merit badge counselor for Boy Scouts, room mother and volunteer aide at Maple Crest Elementary School, band booster, and stamp club treasurer. Having inherited a “green thumb,” Sherry was an avid gardener and raised beautiful perennial flowers in addition to vegetables. Inside, she grew many thriving African Violets. When they retired, Sherry and Stan pursued genealogy, volunteer work, and activities at St. Luke’s United Methodist Church. In 1996, they moved to Minnesota to be close to their sons and their families. They were members of The Well, a United Methodist Church. Sherry is survived by her husband Stan, her son Tony and his wife Paula and her granddaughters Natalie and Linnea as well as her son Eric and his wife Cindy and her grandchildren Oliver, Ava, Lorena, and Dahlia. She is also survived by her brother Wendell Osborn and his wife Sandra, her sister Marilyn Barnett, and her brother Bruce Osborn and his wife Gloria. The family is celebrating her life and her being in heaven with a private memorial service in Minnesota. She will be interred in McFarren Cemetery in Indiana.

The family of Sharon June Merrill created this Life Tributes page to make it easy to share your memories.

Send flowers to the Merrill family.