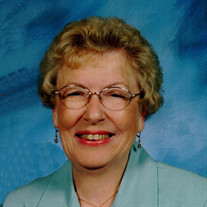 Ruth Ann Reynolds 78 of Bluffton passed away at 1:30 p.m. Sunday, September 20, 2015, at Lutheran Hospital in Fort Wayne. Ruth was born on January 13, 1937 in Fort Wayne, Indiana to William F. & Dorothy (Springer) Wegman. She was a 1954 graduate of Ossian High School. Following high school she worked at Lincoln Bank in downtown Fort Wayne. She also worked for Stoody & Associates in Bluffton for several years. After retirement, she volunteered at the Bargain Hut in Bluffton. Ruth had a servant’s heart. She started teaching Sunday School Classes at the age of 12. When she attended St. John’s Lutheran Church in Fort Wayne, Ruth served in children’s ministry and served as a youth director for more than 12 years. She assisted with bible school in many capacities. She was a very active member of Calvary Lutheran Church in Bluffton. She organized church dinners, participated in various committees and sang in the choir. She was involved in the WELCA. On June 12, 1960 at St. Mark’s Lutheran Church in Ossian, Ruth and Jerry A. Reynolds were married. She is survived by her husband Jerry. They were married for over 55 years. Jerry and Ruth resided in Bluffton. They have two daughters, Christine M. (husband Thomas B.) Stout of Nappanee, and Tamara Sue (husband Mark) Tillman of Portland. She was a proud grandmother of two grandsons; Matthew A. (wife Erin) Stout of Noblesville and Patrick T. Stout of Indianapolis along with one great-granddaughter Grace L. Stout of Noblesville. She is also survived by a brother William F. (wife Shila) Wegman of Ossian. She is preceded in death by her parents and a brother Norman W. Wegman along with an infant sister. Calling hours will be held on Thursday, (September 24, 2015) from 2 to 5 & 6 to 8 p.m. at the Thoma/Rich, Lemler Funeral Home in Bluffton. A service to celebrate Ruth’s life will take place at 10 a.m. on Friday, (September 25, 2015) at Calvary Lutheran Church in Bluffton with calling for one hour prior to the service. Rev. Jerry O’Neal will officiate. Burial will follow at Lindenwood Cemetery in Fort Wayne. Memorials may be made in Ruth’s memory to Calvary Lutheran Church or Visiting Nurse in Fort Wayne. Funeral arrangements have been entrusted to the care of the Thoma/Rich, Lemler Funeral Home in Bluffton. Friends can send online condolences to the family at www.thomarich.com.

The family of Ruth Ann Reynolds created this Life Tributes page to make it easy to share your memories.

Send flowers to the Reynolds family.