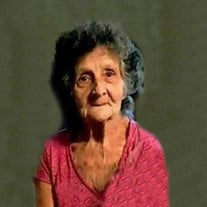 Ruth C. Miller, 90 of Liberty Center, passed away on Thursday morning, August 12, 2021, at her residence, surrounded by her family. Ruth was born on September 28, 1930 in Jay County, Indiana to Russell & Thelma Mae (Bales) Nuckols. Ruth attended Pennville High School and worked at 3M, Franklin Electric and provided in home nursing services since 2002. She was a longtime faithful member of Portland Church of God. On May 10, 1946 Ruth married Harry M. Gaskill and they separated in 1959. On October 24, 1964, Ruth married Fred W. Miller, Sr. and he preceded her in death in 2003. She had a special person, Arthur Ramseyer for the last many years and he preceded her in death in 2020. Survivors include two daughters, Patricia Ann (Rex) Holloway of Keystone and Mary Alice Osborn of Shelburn, Indiana and step-children; Connie Snyder of Anderson, Fred Miller, Jr. of Pennville and Robert Miller of Muncie. She was a loving grandma to 14 grandchildren, 89 great-grandchildren and 50 great-great-grandchildren and 3 great-great-great- grandchildren. Ruth is preceded in death by two sons; John Gaskill & Harold Gaskill along with a sister, Mildred Kunce, and 6 brothers; Ray, Herbert, Wayne, Jerry, Dick and Robert “Bob” Nuckols. The family gathered to celebrate Ruth’s 91st birthday on July 31, 2021, and she greatly enjoyed being able to see and visit with all of her family together. Memorials may be made to Visiting Nurse and Hospice and can be sent to the funeral home. Funeral arrangements have been entrusted to the care of the Thoma/Rich, Lemler Funeral Home in Bluffton. Friends can send online condolences to her family at www.thomarich.com.

The family of Ruth C. Miller created this Life Tributes page to make it easy to share your memories.

Ruth C. Miller, 90 of Liberty Center, passed away on Thursday...

Send flowers to the Miller family.