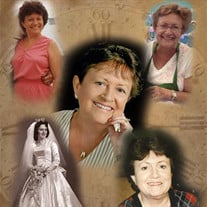 Ruth Ann Stauffer, 78, of Markle passed away late Tuesday, January 7, 2020, at Markle Health & Rehab. Center. Ruth Ann was born on June 19, 1941 in Stroh, Indiana to Kenneth & Pauline (Smith) Faust. A 1959 graduate of Rockcreek High School, Ruth Ann devoted her life to raising her family. Ruth Ann and Gerald “Jay” Stauffer were married on March 6, 1960 at the Markle United Methodist Church, where she was a lifetime member and taught Sunday School. Survivors include her husband of 59 years, Jay of Markle along with her children; Tammera (Richard) Hazelwood of Cumming, GA., Richard J. (Julie) Stauffer of Plymouth, John Edward “Eddie” (Amy) Stauffer and Jayleen (Cory) Smith, both of Markle. She was a proud grandma to 9 grandchildren; Jake Hazelwood, Daniel Stauffer, Michael Stauffer, Joseph Stauffer, Kaylee Patterson, Reilly Stauffer, Lucas Stauffer, Lily Smith and Lora Smith and 2 great-grandchildren, Sawyer & Elias Patterson. Ruth Ann is also survived by 3 sisters; Janet Roebuck of Huntington, Clara Louise Hott of Markle and Dottie Platt of Lafayette. She is preceded in death by a son Christopher Dennis Stauffer, a granddaughter, Addison Ann Stauffer and a brother, Richard Faust. Funeral services will be held at 10:30 A.M. on Saturday (January 11, 2020) at the Markle United Methodist Church with Pastor Chad Yoder officiating. Burial will follow at the Markle Cemetery. Calling hours will be held from 2 to 8 P.M. on Friday at the Thoma/Rich, Lemler Funeral Home in Bluffton and for one hour prior to the service at the church on Saturday. Memorials may be made to the American Kidney Foundation. Funeral arrangements have been entrusted to the care of the Thoma/Rich, Lemler Funeral Home in Bluffton. Friends can send online condolences to the family at www.thomarich.com.

The family of Ruth Ann Stauffer created this Life Tributes page to make it easy to share your memories.

Send flowers to the Stauffer family.