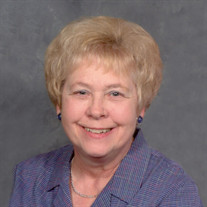 Rose Marie “Ree” Bates, of Bluffton passed away at 9:25 a.m. Wednesday, March 04, 2015, at Ossian Health and Rehabilitation. She was born in Bluffton on April 14, 1936 to Augustus Leimgruber & Pansy (Nuding) Leimgruber. Rose Marie married Robert Gene Bates on January 25, 1958 in Bluffton. She graduated from Bluffton High School in 1954 and from St. Joseph School of Nursing in Fort Wayne. She worked as a RN at Caylor-Nickel Hospital for nearly 40 years retiring in 2002. After retirement Ree volunteered at the Bargain Hut in Bluffton and was active in a variety of charitable organizations. She was a member of the St. Joseph Catholic Church where she was active in the woman’s group. Rose Marie is survived by three sons, Michael (Beth) Bates of Indianapolis, David (Nancy) Bates of Bluffton, Steven Bates of Bluffton, two daughters, Kathy (Duane) Scott of Bluffton, Karen (Michael) Holsinger of Kirklin, thirteen grandchildren, Andrew, Abby, Susannah, Lydia, Phoebe, Jackson, Madeline, Trent, Jennifer, Carly, Morgan, Allie, Kay Marie and twelve great-grandchildren. She is also survived by a sister, Mary Ann Flowers of Bluffton. She is preceded in death by her parents and her husband Robert in 2012. Calling hours are 12 Noon to 7:00 p.m. Sunday, March 8, 2015 at Thoma/Rich, Lemler Funeral Home and one hour prior to service Monday at the church. Rosary will follow the calling hours on Sunday at 7:00 p.m. at the funeral home. Mass of Christian Burial will be held at 10:00 a.m. Monday, March 9, 2015 at St. Joseph Catholic Church. Burial will follow at Fairview Cemetery. Preferred memorials are to St. Joseph Catholic Church or the Alzheimer’s Association. Online condolences may be made at www.thomarich.com.

The family of Rose Marie Bates created this Life Tributes page to make it easy to share your memories.

Send flowers to the Bates family.