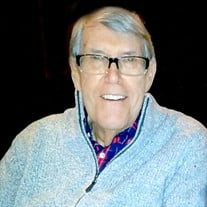 Ronald C. Wimmer, 86, of Bluffton passed away on Thursday evening, July 27, 2017 at Bluffton Regional Medical Center. Ron was born on August 23, 1930 in Marion to Edwin C. & Velma R. (Anderson) Wimmer. He graduated from Marion High School in 1948 and the Graduate School of Banking in Madison, Wisconsin. He served his country from 1951 to 1953 in the United State Army, during the Korean Conflict. Ron began his banking career at Marion Nation Bank from 1948 to 1969, when he joined the Old-First National Bank in Bluffton. He retired as the Senior Vice President of Loans in 1993. He was active for many years in the United Way, Chamber of Commerce, Little League Baseball and Jr. Achievement. Ron enjoyed reading and all types of art and was a member in the Elks Lodge and American Legion Post #111 of Bluffton. On May 25, 1951, Ron and Carolyn Sue (McClain) were married. Survivors include his wife of 66 years, Carolyn of Bluffton along with a son Jan L. (Sandy) Wimmer of Cincinnati, Ohio and two daughters Joni (Clem) Reinhard and Susan (Mark) Sauer, both of Bluffton, along with five grandchildren, Lindsay, Katie, Jacob, Amy and Joel and 4 great grandchildren. He is preceded in death by his parents and two sisters: Alice Merz and Julia Hodge. Calling hours will be held from 1 PM to 7 PM on Sunday at the Thoma/Rich, Lemler Funeral Home in Bluffton. A service to celebrate Ron’s life will be held at 10:30 A.M. on Monday (July 31, 2017) at the funeral home with Jeff Lemler officiating. Private family graveside will take place at the Northridge Mausoleum, located in Fairview Cemetery in Bluffton. Memorials may be made to the Bluffton Elk’s Scholarship Fund. Funeral arrangements have been entrusted to the care of the Thoma/Rich, Lemler Funeral Home in Bluffton. Friends can send online condolences to the family at www.thomarich.com.

The family of Ronald C. Wimmer created this Life Tributes page to make it easy to share your memories.

Ronald C. Wimmer, 86, of Bluffton passed away on Thursday evening,...

Send flowers to the Wimmer family.