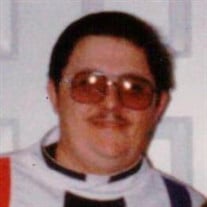 Ronald “Ron” P. Witkus, 58 of Bluffton passed away at 4:11 a.m. Thursday, March 12, 2015, at Hospice Home in Fort Wayne. He was born on July 23, 1956 in Stanley, Wisconsin to Steve Witkus and Louella (Stosko) Witkus. He graduated from Spencer High School in Wisconsin in 1975 and has moved to Indiana in 1978. He worked in the Ford Garage at Maitlen Motors for 4 years and worked at Strick Corporation in Monroe as a life driver for 20 years. He served his country in the United States Army from 1975 to 1977. On June 1, 1980 Ron married F. Gloria (Glessner) Butcher in Portland. He is survived by his wife Gloria of Bluffton along with children: Steven (Linda) W. Cavanaugh of Huntington, Chris L. (Tina) Cavanaugh of Portland, Sherry W. (Tom) Baker of Lebanon, TN, Wendell ( Melinda) Butcher II of Bluffton. Along with siblings: Daniel L. Whiting of Florida, Steve Witkus, Pat (Dale) Stumpner, Nancy (Bob) Mickit, Gary Witkus, Kevin Price and Brian Witkus, all of Wisconsin. He is also survived by 7 grandchildren and five great-grandchildren. He is preceded in death by a son Rocky A. Cavanaugh. The Witkus family would like to thank the Bluffton Fire and Police Department and the Wells County EMS for their assistance and care for Ron. A service to celebrate Ron’s life will be held at 10 a.m. Saturday (March 21, 2015) at the Thoma/Rich, Lemler Funeral Home in Bluffton. Pastor Steve Garrett and Pastor Wendell Kepling will officiate. Calling hours will be held from 4 p.m. to 8 p.m. on Friday. Burial will follow at Fairview Cemetery in Bluffton where military honors will be performed by the United Sates Army and American Legion Post #111 of Bluffton. Memorials may be made in Ron’s memory to Bluffton Fire Department for Fire Safety Education in our local schools. Funeral arrangements have been entrusted to the care of the Thoma/Rich, Lemler Funeral Home in Bluffton. Friends can send online condolences to the family at www.thomarich.com.

The family of Ronald "Ron" P. Witkus created this Life Tributes page to make it easy to share your memories.

Send flowers to the Witkus family.