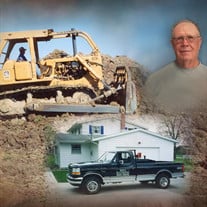 Ronald “Ron” M. Ramseyer, 78 of Bluffton, passed away on Sunday morning, November 14, 2021, at his residence, surrounded by his family. Ron was born on May 19, 1943 in Wells County, Indiana to Alfred F. & Ida Mae (Osborn) Ramseyer and graduated from Petroleum High School with the class of 1961. He served in the Indiana National Guard from 1964 to 1970. Ron went to work for James E. Powell Bulldozing in 1963 and started his own company, Ron’s Bulldozing Business in 1985, and worked all over Northeast Indiana until he retired in December of 2020. Ron & Janet L. (Diss) Ramseyer were married on February 11, 1967 in Fort Wayne. Survivors include his wife Janet of Bluffton, along with children; Tamara (Rhett) Stuard of Danville, IN, Deborah (Thomas) Cronin of Lexington, SC., Brian (Janet) Ramseyer of Bluffton and Sara (Chris) Hansen of Bluffton. Ron was a loving grandpa to 8 grandchildren; Alexis Ramseyer, Carter Stuard, Patrick Cronin, William Cronin, Emily Hansen, Abby Ramseyer, Erin Ramseyer & Ruby Hansen. Ron is also survived by a brother, William M. Ramseyer of Ossian, and 3 sisters; Carolyn (Norman) Thompson of Ossian, Kathy (John) Poore of Bluffton and Joyce (F.P.) Koroma of Bluffton. He is preceded in death by his parents and two brothers; Richard Ramseyer and Roy Ramseyer. Funeral Services will take place at 10:30 A.M. on Saturday (Nov. 20, 2021) at the First United Methodist Church in Bluffton with Rev. Sherrie Drake officiating. Burial will follow at Stahl Cemetery. Visitation will take place from 2 P.M. to 8 P.M. on Friday (Nov. 19, 2021) at the Thoma/Rich, Lemler Funeral Home in Bluffton and for one hour prior to the service at the church. Memorials may be made to the First United Methodist Church or to Cancer Services of Northeast Indiana. Funeral arrangements have been entrusted to the care of the Thoma/Rich, Lemler Funeral Home in Bluffton. Friends can send online condolences to the Ramseyer family at www.thomarich.com.

The family of Ronald "Ron" M. Ramseyer created this Life Tributes page to make it easy to share your memories.

Send flowers to the Ramseyer family.