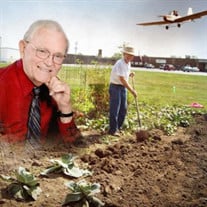 Ronald P. Merchant, 91 of Markle, Indiana passed away on Thursday afternoon, April 16, 2020 at Lutheran Hospital in Fort Wayne. Ron was born on May 27, 1928 in Fort Wayne, Indiana to Edwin L. & Helen (Weaver) Merchant. He graduated from East Union High School in 1946. Right out of high school, Ron worked at the Zanesville Locker Plant and helped build the facility from the ground up. On December 29, 1950 at the EUB Church in Zanesville, Ron & Beverly A. (McClenny) were married. Two weeks later, Ron was drafted into the United States Army, and the newly married couple moved to Germany where Ron served for 2 years and was honorably discharged with the rank of Private First Class. The couple moved back home with a newborn son and set up their home in Waynedale, later moving to the Zanesville area. Ron returned to working as a meat cutter for the Kroger Company at area store locations for 25+ years. Ron and Bev also owned and operated the Slumber Inn Motel in Markle for 18 years. Ron could often be seen working in his garden or in his woodshop. He was very detailed in his woodworking projects and made many beautiful projects for his family. Ron built 2 houses and even built his own airplane in his garage and flew it at a local air strip. This was probably his favorite place to be, flying in a plane that he built with his own hands! Ron and Bev happily enjoyed 68 years of marriage before she preceded him in death on December 20, 2018. He was a 30+ year member of Hope Missionary Church in Bluffton. Survivors include their two children; David P. (Marquita) Merchant of Markle and Sharon A. (David) Scheiber of Churubusco, Indiana. He was a loving Grandpa to five grandchildren; Benjamin (Amber) Merchant, Sarah (Paul) Ziegler, Randy (Konny) Merchant, Justin (Priscila) Scheiber and Theresa (Justin) Brown, along with 9 great-grandchildren; Avery, Atticus and Atlas Merchant, Chloe Ziegler, Paige & Mason Merchant and Eden, Naomi and Corah Brown. He is also survived by a sister, Shirley (Kirby) Mossburg of Markle. Private family services will take place at the Thoma/Rich, Lemler Funeral Home in Bluffton with Pastor Gary Aupperle officiating. Burial will follow at Hoverstock Cemetery in Zanesville. Memorials may be made in Ron’s memory to Samaritan’s Purse, through the funeral home. Funeral arrangements have been entrusted to the care of the Thoma/Rich, Lemler Funeral Home in Bluffton. Friends can send online condolences to the family at www.thomarich.com.

The family of Ronald P. Merchant created this Life Tributes page to make it easy to share your memories.

Ronald P. Merchant, 91 of Markle, Indiana passed away on Thursday...

Send flowers to the Merchant family.