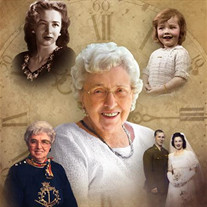 Roma E. "Frankie" McFarren,94, of Bluffton, passed away on Saturday afternoon, February 9,2019, at Christian Care Retirement Community in Bluffton. Frankie was born on June 5, 1924 in Melbourne, Australia to Ernest & Evelyn (Trickey) Frankland. She graduated from Mc Robertson Girls School in 1938 and graduated from Metropolitan College in 1940. Frankie worked as office manager at RSM Color Lab in Bluffton, Walter W. Bierberich, and Bennet Learning Center. She retired as an administrative assistant with Three Rivers Literacy Alliance in 2001. Frankie was a life-long church member, holding many leadership positions and singing in the choir and playing bells. She is currently a member of the Bluffton First Church of Christ. Frankie served as a state officer for Tri Kappa and was a member of the Bayview Reading Club. She volunteered with the Mental Health Association, The American Red Cross, and Bluffton Regional Medical Center and was both a Girl Scout and Cub Scout leader. Frankie and Robert W. McFarren were married on May 6, 1944 in Melbourne, Australia; he preceded her in death on June 3,2001. Survivors include her children: Sue Manning of Fort Wayne, Diana (George)Wood of lndianapolis, and Gary (Rhonda) McFarren of Keystone and grandchildren Dr. Kim Allen of lndianapolis, Chad (Peggy)Allen of lndianapolis, Dr. George (Jennifer) Manning of Ft. Wayne, Meredith (Elbert) Starks of Ft. Wayne, Rob McFarren of Phoenix, AZ and Joe (Heather) McFarren of Liberty Center. Her six greatgrandchildren include lsaac Allen, Gabe Starks, Nathan Starks, Sydney McFarren, Sarah McFarren, and Anna McFarren. Frankie has many nieces and nephews in the U.S.A. and Australia. She is preceded in death by her parents and three brothers, Fred Frankland, Victor Frankland, and Sidney Frankland, all of Melbourne, Australia. A service to celebrate Frankie’s life will be held at 10:30 A.M. on Friday, February 15, 2019, at the First Church of Christ in Bluffton. Pastor Brandon Kelley will officiate. Calling Hours will be held from 5 to 8 P.M. on Thursday, February 14, 2019, at the Thoma/Rich, Lemler Funeral Home in Bluffton and for one hour prior to the service at the church. There will be a Tri Kappa Memorial Service for Frankie at 8 P.M. on Thursday at the funeral home, at the conclusion of calling hours. Memorials may be made to the First Church of Christ Mission Fund. Burial will take place at Elm Grove Cemetery in Bluffton. Funeral arrangements have been entrusted to the care of the Thoma/Rich, Lemler Funeral Home in Bluffton. Friends can send online condolences to the family at www.thomarich.com.

The family of Roma "Frankie" McFarren created this Life Tributes page to make it easy to share your memories.

Roma E. &quot;Frankie&quot; McFarren,94, of Bluffton, passed away on Saturday...

Send flowers to the McFarren family.