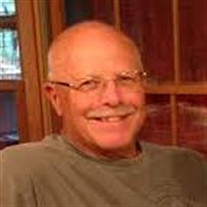 Roland C. Fritts, 63 of Markle passed away on March 4, 2015 in Kauai. Roland was born on October 7, 1951 in Bluffton to James Fritts and Esther M. (Gerard) Fritts. He graduated from Blackford High School in 1970 and went on to earn a M.S. in Physics and Mathematics from Ball State University. He was a teacher at Southern Wells High School for 5 years, an engineer at Raytheon and other companies before becoming the president of Ultra Electronics – U.S.S.I. where he retired in 2013. He was an active member of the First Church of Christ in Bluffton. His wife is left with warm memories of a man who was driven and intelligent, but more importantly the most loving, kind, and gentle husband, father, and grandfather anyone could ask for, whose thirst for knowledge and passion for life inspired the lives of everyone around him. An unrelenting dreamer. His children considered him the resident expert in just about everything. He was the ultimate teacher who would drop anything to help or plan their many projects. His presence in their lives is unreplaceable and he will be sorely missed. He was able to spend the last five years with his grandchildren who completely adored their “PaPa RoRo.” He taught them to always dance at the end of a movie at the credits and how to nap anywhere. He will be remembered as a man of many hobbies. Horses, rebuilding cars with his brother Paul, traveling, lake living, helping friends and family, big bowls of ice cream, music, garage sale shopping, and so much more. On November 25th, 1972 Roland and Kathy S. (Moore) Fritts were married. Kathy survives in Markle along with children and grandchildren: Ryan (wife Karla) Fritts and children Dessie (5) and Korbin (2) of Ossian, Tyson (fiancé Christina) Fritts and son Atlas (4 months) of Indianapolis, Amanda (husband Chris) Esterling and children Harper (5) Finley (4) and Whittaker (2 months) of Morton, IL. Along with siblings: Paul (wife Margaret) Fritts of Montpelier, IN and Pam (husband Greg) Dubach of Geneva, Indiana. A service to celebrate Roland’s life will be held at 1:00 p.m. on Saturday (March 14, 2015) at the First Church of Christ in Bluffton. Pastor Larry Sprinkle will officiate. Calling hours will be held from 2 p.m. to 8 p.m. on Friday at the Thoma/Rich, Lemler Funeral Home in Bluffton, and for one hour prior to the service at the church. Burial will follow at Stahl Cemetery in Wells County. Memorials may be made in Roland’s memory to The Steve Kelly Cancer Relief Foundation through the funeral home. Funeral arrangements have been entrusted to the care of the Thoma/Rich, Lemler Funeral Home in Bluffton. Friends can send online condolences to the family at www.thomarich.com.

Roland C. Fritts, 63 of Markle passed away on March 4, 2015 in Kauai. Roland was born on October 7, 1951 in Bluffton to James Fritts and Esther M. (Gerard) Fritts. He graduated from Blackford High School in 1970 and went on to earn a M.S. in... View Obituary & Service Information

The family of Roland C. Fritts created this Life Tributes page to make it easy to share your memories.

Send flowers to the Fritts family.