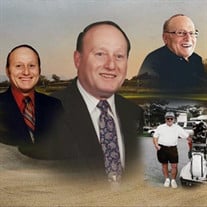 Our beloved husband, father, grandfather and great grandfather, Roger Longenberger age 88, passed away peacefully in the comfort of his home and surrounded by family on April 20, 2022. He was born February 2, 1934, to Ernest and Pearl Longenberger in Decatur, Indiana. He is now reunited with his lifetime sweetheart, Marilyn (Durr) whom he married in 1953. Roger was a successful area businessman dedicated and determined to provide his family every opportunity. Growing up on his parents’ farm, at an early age, he learned industriousness and perseverance were values necessary to build a successful career. He instilled these same values in his daughters. In his earlier years, after long days at Gerber Furniture in Bluffton, he would help his in-laws run their farm or would coach his daughter Sara’s softball team. Roger partnered with Marilyn, his brother Harry, and his wife Devona for thirty years to build their successful Gerber Furniture, an enduring Bluffton staple. They passed the torch to their daughter Sara upon retirement in 2000. Roger also supported Marilyn and his daughter Debbie operate The Sugar Plum Tree, a children’s clothing store in Bluffton. Everyone who knew Roger knows that he was an extremely kind and friendly gentleman. He never seemed to meet a stranger and loved sharing stories of his experiences with customers, friends, and family. He often had kind and encouraging words for everyone. Roger was the consummate gentleman especially with Marilyn and he made sure his sons-in-laws toed the line with his daughters. Roger enjoyed sports and the outdoors. He always rooted on his Hoosiers, Boilermakers and Pacers and he and Marilyn were members of the former Parlor City Country Club where he taught Marilyn the game. He might have been too good a teacher because the hole-in-one eluded him but not Marilyn. Roger, Marilyn, family, and friends also enjoyed time on the lake boating, fishing and relaxing. Roger lived with Parkinson’s disease for the last eighteen years of his life. He battled the disease with the most amazing grace, bravery, and strength. He lived everyday with positivity and the determination not to let the disease keep him from doing the things he loved. Roger is survived by two brothers, William, and Richard; his daughters, Mrs. Robert (Debbie) Cress of Bluffton, Mrs. Michael (Cindy) Carr of Indianapolis, and Mrs. Brent (Sara) Imel of Bluffton; six grandchildren, Heather (Cress) Carlson, Ryan Carr, Drew Imel, Nicole (Cress) Sliger, Matt Carr and Nick Imel; and five great grandchildren, Colton, Jaxon, Lincoln, Adalynn, and Lane. He was preceded in death by his best friend and love of his life Marilyn, his parents Ernest and Pearl, his brother Harry and his dear sisters Lucille, Helen, and Betty. Funeral services will be held at 4:00 P.M. Monday, April 25, 2022 at the First United Methodist Church in Bluffton with Chaplin Joy Cash officiating. Burial will follow at Elm Grove Cemetery. Friends may visit with the family from 1:00 P.M. to 4:00 P.M. prior to the service at the church. Memorials may be made to the Rock Steady Boxing. Funeral arrangements have been entrusted to the care of the Thoma / Rich, Lemler Funeral Home in Bluffton. Friends can send online condolences to the family at www.thomarich.com.

Our beloved husband, father, grandfather and great grandfather, Roger Longenberger age 88, passed away peacefully in the comfort of his home and surrounded by family on April 20, 2022. He was born February 2, 1934, to Ernest and Pearl Longenberger... View Obituary & Service Information

The family of Roger D. Longenberger created this Life Tributes page to make it easy to share your memories.

Send flowers to the Longenberger family.