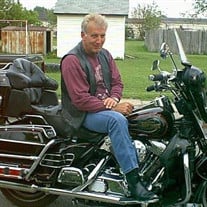 Roger Dale Brown, 73, of Uniondale passed away Wednesday morning, October 9, 2019, at Lutheran Hospital in Fort Wayne. He was born on September 3, 1946 in Adams County to Roger B. & Glenola May (Beers) Brown. Dale attended Bluffton High School and served our county in the United States Army during Vietnam and was honorably discharged with the rank of E-5. He also served in the Army Reserve and Army National Guard, stationed in Bluffton for over 15 years. Dale retired from General Electric in Fort Wayne and worked as a security guard for GARDA and in the maintenance department of Bluffton Regional Medical Center. He was a 50+ year member of the American Legion Post #111 of Bluffton. On June 10, 1994, Dale and Carolyn S. (Fulton) were married and she preceded him in death on November 10, 2018. Dale is survived by his children; Dale Wayne (Jan) Brown, Tony (Michelle) Schaffer and Kim Shaffer, all of Decatur, along with step-children; Sheryl (Troy) Zook, Rod Wells and Doug Wells of Bluffton and Jeffrey A. Wells of Montpelier. He was a loving grandpa to 6 grandchildren; Mallory, Jarred, Anthony, Kirsten, Korbin and Konner and 2 great-grandchildren; Caiden and Cooper and several step-grandchildren and step-great-grandchildren, along with many nieces and nephews. Dale is also survived by his siblings; David G. (Jill) Brown of Greenburg, IN, William J. (Pam) Brown of Brooksville, FL, Stanley T. (Nancy) Brown of Brookville, FL and Robert B. (Judy) Brown of Bluffton. He is preceded in death by his parents, wife and a sister, Sylvia S. (Brown) Keller. A service to honor Dale’s military service will be held at 2:30 P.M. on Saturday (Oct. 12th) at the American Legion Post #111 of Bluffton. Memorials may be made to the American Legion Post #111 of Bluffton and can be sent to the funeral home. Dale’s arrangements have been entrusted to the care of the Thoma/Rich, Lemler Funeral Home in Bluffton. Friends can send online condolences to the family at www.thomarich.com.

The family of Roger Dale Brown created this Life Tributes page to make it easy to share your memories.

Send flowers to the Brown family.