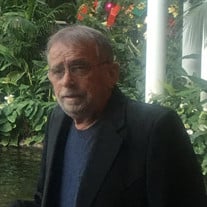 Rocky E. Mahon, 64, a longtime former Bluffton resident, passed away on Tuesday (Sept. 19, 2017) in Clarksville, Tennessee. He was born on March 14, 1953 in Watseka, IL. to Donald & Deloris (Atwood) Mahon. Rocky graduated from Bluffton High School in 1971, and served in the United States Army. Rocky was a self-employed construction contractor and also had a brief career in the coal mine industry in Virginia. His hobbies included: making wine, traveling, playing cards, NASCAR, football, and loved watching and taking care of wildlife. He loved hosting family and friends. If you ever stayed at their home, you woke up to a breakfast feast including his famous biscuits and gravy. Rocky’s greatest loves were his wife and children and his grandchildren were the world to him. On May 2, 1972 in Bluffton, Rocky & Kathy A. (Gobernatz) Mahon were married. Survivors include his mother Deloris Mahon of Bluffton, wife Kathy of Clarksville, TN and children: Stacy (Mario) Mahon-Vazquez of Clarksville, Teresa Mahon of Fort Wayne, Judi (Eric) Mahon-Salva of London, KY, Karry Ladd of McAllen, TX, Perlina “P.J.” (Chris Elza) Mahon of London, KY. He was a loving Papaw to 14 grandchildren and 6 great-grandchildren. He is also survived by many nieces and nephews. Rocky is also survived by a brother Gene (Lisa) Mahon of Bluffton and sisters: Karen Keeling of Delphos, OH, Brenda Mahon of Bluffton and Cheryl Zeis of Bluffton. He is preceded in death by his father Donald Mahon and a son Rocky Lee Mahon, and four brothers; Donald D., David L., Steven A. and Glen A. Mahon. Calling hours will be held on Sunday from 1 to 7 at the Thoma/Rich, Lemler Funeral Home in Bluffton. Funeral services will take place at 10:30 A.M. on Monday (Sept. 25, 2017) at the funeral home with calling for one hour prior to the service. Rev. Douglas McClure will officiate. Burial will follow at West Lawn Cemetery in Geneva. The family encourages that memorials may be made to Bluffton Police Dept. DARE Program or Bluffton Fire Department in lieu of sending flowers. Funeral arrangements have been entrusted to the care of the Thoma/Rich, Lemler Funeral Home in Bluffton. Friends can send online condolences to the family at www.thomarich.com.

The family of Rocky E. Mahon created this Life Tributes page to make it easy to share your memories.

Send flowers to the Mahon family.