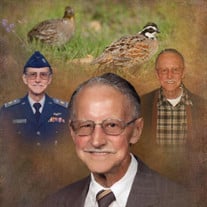 Dr. Robert Ray Priddy, 92 of Huntington, passed away peacefully in his sleep early Sunday morning, November 21, 2021 at his residence. He was born on January 17, 1929 in Muncie, Indiana to Harold E. & Dorothy M. (Yost) Priddy. He graduated from Bluffton High School and served as a PFC in the U.S. Marines Reserve Company Band from 1947-1949 and served as a major in the Civil Air Patrol at the Fort Wayne Senior Squadron. He is a graduate of Huntington College, University of St. Francis and Ball State University. Dr. Priddy worked at Dana Corporation in Fort Wayne, taught for 7 years in the Bluffton-Harrison MSD and Huntington County Community Schools, and taught for 25 years as a professor at Huntington College and Mount Vernon Nazarene College, where he retired with as a Professor Emeritus. He conducted research on Bobwhite Quail in Indiana and Ohio for over 30 years. Dr. Priddy married H. Rosalie (Wright) on July 2, 1948. They shared 54 years of marriage before she preceded him in death on May 1, 2002. Survivors include his children; Dr. Evelyn Priddy of Huntington, Jacqueline (David) Miller of LaPorte, IN., Dr. David (Marilyn) Priddy of Peoria, IL. along with 4 grandchildren; Cheryl (Joe) Killingbeck, Michelle (Evan) Lancaster, Gregory Miller and Stephanie (Chet) Hunsley and 2 great-grandchildren; Wesley and Finley Lancaster. Dr. Priddy is also survived by 3 sisters; Roberta Ruth Solts of Boise, ID., Mary Lou Johnson of Colorado and Martha Sue Mitchem, of Rock View, WV., along with 10 nieces and nephews. He is preceded in death by his parents and his wife. Funeral Services will be held at 11 A.M. on Saturday (Nov. 27, 2021) at the Thoma/Rich, Lemler Funeral Home in Bluffton with Pastor Kate Uebersax officiating. Burial will follow at I.O.O.F. – Twin Hills Cemetery in Pennville. Calling will take place for one hour prior to the funeral service. Memorials may be made to Huntington University, Mount Vernon Nazarene College or to the memorial of the donor’s choice. Funeral arrangements have been entrusted to the care of the Thoma/Rich, Lemler Funeral Home in Bluffton. Friends can send online condolences to the family at www.thomarich.com.

Dr. Robert Ray Priddy, 92 of Huntington, passed away peacefully in his sleep early Sunday morning, November 21, 2021 at his residence. He was born on January 17, 1929 in Muncie, Indiana to Harold E. & Dorothy M. (Yost) Priddy. He graduated from... View Obituary & Service Information

The family of Dr. Robert Ray Priddy created this Life Tributes page to make it easy to share your memories.

Send flowers to the Priddy family.