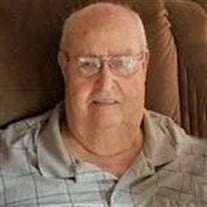 Robert “Bob” Claghorn, 87, of Bluffton passed away on Wednesday evening, February 7, 2018, at Heritage Pointe in Warren. Bob was born on October 22, 1930 in Detroit, Michigan to Walter & Berta (Duvall) Claghorn. He graduated from P.A. Allen High School in Bluffton in 1948. He enjoyed farming and was well respected as a mechanic in the Bluffton area. He worked as an electrician for Corning Glass in Bluffton for 22 years and retired from General Motors in Fort Wayne in 1996, after 10 years. He was an avid wood worker, enjoyed family genealogy, spending time with his family and loved his grandchildren. Bob and Geraldine “Gerry” (Mounsey) were married on June 11, 1950 at Epworth United Methodist Church in Bluffton. Survivors include his wife Gerry of Bluffton along with 7 children: Pamela (Michael) Spichiger of Louisville, KY, Constance “Connie” Embler of Indianapolis, Keith (Carla) Claghorn of Carmel, IN, Robert “Bob” (Cindy Jones) Claghorn of South Pasadena, FL, Debra (Larry) Quade of Jasper, IN, Kent (Tara) Claghorn of Zionsville, IN and Timothy (Teresa) Claghorn of Bluffton. He is also survived by 18 grandchildren and 31 great-grandchildren. He is preceded in death by a grandson Alex Claghorn and two brothers Walter and James Claghorn, along with his parents. A service to celebrate Bob’s life will be held at 10:30 on Monday (February 12, 2018) the Thoma/Rich, Lemler Funeral Home in Bluffton with his nephew Ted Claghorn officiating. Burial will follow at Six Mile Cemetery in Bluffton. Visitation will be held from 1 to 5 p.m. on Sunday at the Thoma/Rich, Lemler Funeral Home and for one hour prior to the service. Memorials may be made to Heritage Pointe Memory Care Unit. Funeral arrangements have been entrusted to the care of the Thoma/Rich, Lemler Funeral Home in Bluffton. Friends can send online condolences to the Claghorn family at www.thomarich.com.

The family of Robert G Claghorn created this Life Tributes page to make it easy to share your memories.

Robert “Bob” Claghorn, 87, of Bluffton passed away on Wednesday...

Send flowers to the Claghorn family.