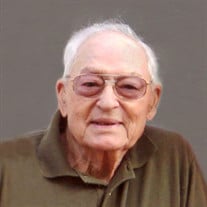 Robert G. (Bob) Brickley, 89, of Craigville died Friday, August 7, from age-related causes. A life-long resident of Wells County, he was the second of seven children born to Dwight E. and Ruby Brickley on December 24, 1925. He married Delila Frauhiger in 1947. He married Priscilla Brinneman in 1976. She died in June, 2015. When he was a child, the Brickley family lived at Chester Center, Plumtree and Petroleum, where he graduated from high school. Bob played sports in high school and participated in softball, basketball and track. He enjoyed being active and continued playing softball as an adult. He was on bowling teams and golf teams and in his later years he won awards for his prowess in golf, which he was able to play until very late in life. Bob was a veteran of WWII, entering the Army in 1944. He served with the 63rd Infantry, B Company and was wounded in the Battle of the Bulge. He was awarded the Purple Heart and Bronze Star with oak leaf cluster. He worked at Gerber Furniture, then at Franklin Electric, from where he retired after 33 years. Over the years his hobbies included mushroom hunting, fishing, gardening, woodworking and golf. He was a 70-year member of the American Legion and had belonged to the Lions Club. He was preceded in death by his older brother, Richard, and sisters Wilda Holmes and Meleta Eschbaugh. Survivors include two brothers: Earl (Shirley) Brickley of Bluffton and Jerry (Janice) Brickley of Springboro OH; sister Phyllis (Herman) Fiechter of Craigville; four children, Sandy (Mike) Thoele of Oregon, Diane (Pat) Oetting of Fort Wayne, Gale (Marlene) Brickley of Oregon, and Cheryl (Jim) Hunt of Oregon; step-sons Larry Brinneman of Kentucky and Dave (Rita) Brinneman of Bluffton, seven grandchildren and many great-grandchildren. A service to celebrate Bob’s life will be held at 10:00 a.m. on Wednesday (August 12, 2015) at the Thoma/Rich, Lemler Funeral Home in Bluffton. Pastor Steve Bard will officiate. Calling hours will be held from 2 to 5 & 6 to 8 on Tuesday and for one hour prior to the service on Wednesday. Burial will take place at Elm Grove Cemetery with military rites by the United States Army Honor Guard and American Legion Post #111 of Bluffton. Memorial contributions may be made to Family Life Care / Hospice of Berne. Funeral arrangements have been entrusted to the care of the Thoma/Rich, Lemler Funeral Home in Bluffton. Friends can share online condolences and memories at www.thomarich.com.

The family of Robert "Bob" G. Brickley created this Life Tributes page to make it easy to share your memories.

Send flowers to the Brickley family.