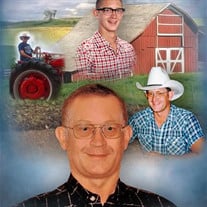 Ricky Allen Mounsey, 67, of Poneto, Indiana passed away on February 1, 2017. His Heavenly Father took him home after a 6 ½ week battle with encephalitis. He was born to Dean and the late Patricia (Scott) Mounsey on April 15, 1949 in Wells County, Indiana. Rick attended Chester Center School and was a member of the first graduating class of Southern Wells Community School. He later was a school board member from 1998 to 2010. He has been a loving husband to his wife Kathie Sue (Zent) Mounsey for 47 years. Rick is a veteran of the United States Air National Guard. He enjoyed a career of being a farmer and truck driver. Rick was passionate about Jesus. He was very involved with his church and played an active role on the Sonlight Wesleyan Church Missions Team. He was also a member of the Gideon’s. Rick was a joy to be around and by his example taught us all how we should live. Rick is survived by his father, Dean Mounsey of Warren, Indiana, wife, Kathie Sue (Zent) Mounsey of Poneto, Indiana; siblings, Rodney (Rosemary) Mounsey of Poneto, Indiana , Randy Mounsey of Petroleum, Indiana, Cheryl (George) DeWeese and Vicki (Tim) Andrews, both of Warren, Indiana. He is also survived by three sons; Jeremy (Kristine) Mounsey of Warren, Indiana, Jody (Kristi) Mounsey of Poneto, Indiana and Jerrod (Charissa) Mounsey of Poneto, Indiana. He loved spending time with his 13 grandchildren and 1 great grandchild. He was preceded in death by his great grandson, Parker Alan Petty. A Service to Celebrate Rick’s life will be held at 10 a.m. on Wednesday (February 8, 2017) at Sonlight Wesleyan Church in Bluffton. Rev. Lyle Breeding will officiate. Burial will follow at Woodlawn Cemetery in Warren, Indiana. Calling hours will be held from 12 NOON to 8 P.M. on Tuesday at the Thoma/Rich, Lemler Funeral Home in Bluffton and for one hour prior to the service at the church. Memorials may be made to the Sonlight Wesleyan Church Mission Team, The Gideon’s or Visiting Nurse & Hospice Home in Fort Wayne. Funeral arrangements have been entrusted to the care of the Thoma/Rich, Lemler Funeral Home in Bluffton. Friends can send online condolences to the family at www.thomarich.com.

Ricky Allen Mounsey, 67, of Poneto, Indiana passed away on February 1, 2017. His Heavenly Father took him home after a 6 ½ week battle with encephalitis. He was born to Dean and the late Patricia (Scott) Mounsey on April 15, 1949 in Wells County,... View Obituary & Service Information

The family of Rick A Mounsey created this Life Tributes page to make it easy to share your memories.

Ricky Allen Mounsey, 67, of Poneto, Indiana passed away on February...

Send flowers to the Mounsey family.