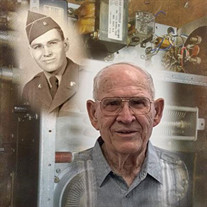 Richard W. “Dick” Stroud, 90, of Liberty Center passed away on Wednesday morning, May 13, 2020, at his daughter’s home in Fort Wayne. He was born on September 20, 1929 in Liberty Center, Indiana to Charles & Stella (Ward) Stroud and graduated from Swayzee High School in 1947. Dick served his country in the United States Army Signal Corps during the Korean War and assisted with testing of the hydrogen bomb in Nevada and Bikini Atoll. When he was honorably discharged in July of 1953, Dick worked as an Electrical Engineer working on military radios. He worked at Magnavox / Phillips Company for 31 years, until he retired in 1990. He was a dedicated member of the Liberty Center United Methodist Church, Liberty Center Lions Club, Hoosier Cruisers, RV Radio Network and other RV Clubs. Dick was also a member of the FMCA Amateur Radio Chapter, a board member for the Wells County Historical Society and was a published author of articles for radio and RV magazines & poems. On December 26, 1952 in Bluffton, Dick and Ruth E. (Johnson) were married. They were happily married for 62 years and Ruth preceded him in death on March 16, 2016. Survivors include four children: Gerald Lee “Gary” (Peggy) Stroud of Manassas, Virginia, Karen Jo Parsons of Fort Wayne, Indiana, Keith Alan (Tammy) Stroud of Bluffton, Indiana and Gregory Charles (Susan) Stroud of Huntington, Indiana along with 12 grandchildren and 6 great-grandchildren with one additional great-grandchild due in June. Dick is also survived by a sister, Virginia (Walt) McMillen of rural Bluffton, a brother Joe (Sharon) Stroud of rural Zanesville and a friend, Wilda Tobias of Elwood. He is preceded in death by a brother, Jim Stroud, a grandson Joshua Parsons, and a granddaughter, Stephanie Kelley. Funeral Services will be held at 11 A.M. on Thursday (May 28, 2020) at the Thoma/Rich, Lemler Funeral Home with Pastor Diane Samuels of Liberty Center United Methodist Church officiating. Burial will follow at Mossburg Cemetery in Liberty Center, Indiana. Visitation will be held on Wednesday (May 27, 2020) from 2 p.m. to 4 p.m. and 6 p.m. to 8 p.m. at the funeral home and for one hour prior to the service at the funeral home on Thursday. Memorials may be made to the Liberty Center United Methodist Church or the Wells County Historical Society. Funeral arrangements have been entrusted to the care of the Thoma/Rich, Lemler Funeral Home in Bluffton. Friends can send online condolences to the Stroud family at www.thomarich.com.

The family of Richard W. Stroud created this Life Tributes page to make it easy to share your memories.

Send flowers to the Stroud family.