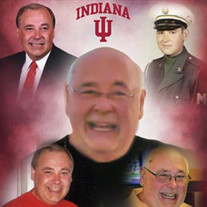 Richard E. “Dick” Thompson, 69 of Liberty Center, Indiana passed away on Thursday afternoon, October 22, 2020, at his residence. Dick was born on April 16, 1951 in Bluffton to John Ware & Maxine (Markley) Thompson. He attended Liberty Center Elementary and Jr. High and graduated from Southern Wells High School in 1969. He served his country in the United State Army, serving in the military police from 1971 to 1973. Dick was an active member for over 50 years of Boehmer United Methodist Church where he held many offices. He was also involved in the Friends of the Library and the Wells County Historical Society. Dick was an avid IU basketball fan and enjoyed working on family genealogy and completed 3 books of genealogy on both sides of his family. He will forever be remembered for his huge smile, his kindness he showed to everyone and for his jokes! Dick retired as a packer at Pretzel’s Inc. in Bluffton after 11 years and previously worked at Ludwig’s, Maloley’s and Gerber Super Value from 1973 to 2011. Survivors include his brother, Jim Thompson of Liberty Center and nieces/nephews; Jeff (Tonya) Thompson of Pierceton Jami (Tim) Prough, Jennifer (Chris) Earhart and Troy McAfee, all of Bluffton. He is also survived by great nephews; Derek (Lacey) Prough, Jobe Thompson, Shelby Earhart, Josh Thompson, Trevor Prough and Jaci Prough along with two great-great-nieces and a great-great-nephew; Jason Prough, Emily Prough & Piper Earhart and several cousins. He is preceded in death by his parents, a brother Bill Thompson and a sister, Joyce Ann McAfee. Above all else Dick loved God, his family and friends more than anything. Visitation will be held on Wednesday (Oct. 28, 2020) from 4 P.M. to 8 P.M. at the Thoma/Rich, Lemler Funeral Home in Bluffton and for one hour prior to the service. A funeral service will be held at 10: 30 A.M. on Thursday (Oct. 29, 2020) at the Thoma/Rich, Lemler Funeral Home in Bluffton with Rev. Barry Humble. Burial will follow at Mossburg Cemetery in Liberty Center, Indiana with military honors by the United State Army Honor Guard and the American Legion Post #111 Honor Guard. Memorials may be made to the Boehmer United Methodist Church or to Mossburg Cemetery Association or the memorial of the donor’s choice. The safety of the family and all visitors is our utmost priority. For everyone’s safety, we ask that you practice social distancing. Masks are required for visitation and for Dick’s service. We appreciate your cooperation and patience. Funeral arrangements have been entrusted to the care of the Thoma/Rich, Lemler Funeral Home in Bluffton. Friends can send online condolences to the family at www.thomarich.com.

The family of Richard "Dick" E. Thompson created this Life Tributes page to make it easy to share your memories.