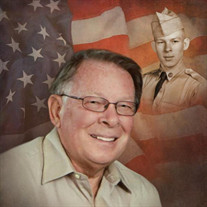 Richard “Dick” G. Snider, 82 of Bluffton, passed away Thursday evening, April 29, 2021 at Coventry Meadows in Fort Wayne. Dick was born on July 19, 1938 in Waynesfield, Ohio to Harold Lee and Vaila Mae (Armbruster) Snider. He was a 1957 graduate of Shawnee High School in Lima, Ohio. Dick served in the U.S. Army from 1957 until 1960. Dick worked for International Harvester, Borg Warner Gear in Muncie and Hayes Wheels in Huntington. He was a member of Hope Missionary Church. He enjoyed spending time with his family, woodworking, golfing, fishing and traveling. On August 14, 1957 in Cridersville, Ohio, Dick and Rita L. Lehman were married. Survivors include his wife of 63 years, Rita, a daughter Linda R. Reed of Fort Wayne and a son Keith E. Snider of Markle, four grandchildren and three great-grandchildren. Dick is preceded in death by his parents, and two brothers Robert Snider and Larry Snider. Funeral services will be held at 10:30 A.M. on Wednesday, May 5, 2021, with Pastor Gary Aupperle officiating. Burial will follow at Fairview Cemetery in Bluffton with military honors. Calling hours will be held from 4 P.M. to 8 P.M. on Tuesday at the funeral home and for one hour prior to the service on Wednesday. Memorials may be made in Dick’s memory to Wells County Alzheimer’s Support Group, St. Jude Children’s Hospital or Hope Missionary Church. The safety of the family and all visitors is our utmost priority. For everyone’s safety, we ask that you practice social distancing. Masks are at your own discretion. During the current guidelines, we are only allowed a limited number of people in the building at a time. We appreciate your cooperation and patience. Funeral arrangements have been entrusted to the care of the Thoma/Rich, Lemler Funeral Home in Bluffton. Friends can send online condolences to the family at www.thomarich.com.

The family of Richard "Dick" Gene Snider created this Life Tributes page to make it easy to share your memories.

Send flowers to the Snider family.