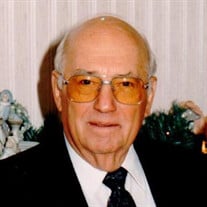 Richard W. “Dick” Shaffer, 89, of Craigville, passed away at 3:20 a.m. Friday, Aug. 7, 2015, at River Terrace in Bluffton. He was born Feb. 6, 1926 in Bluffton to Perry and Ida (Kehrn) Shaffer. He married Jackie (Robinson) Shaffer on June 19, 1948, in Fort Wayne. He graduated in 1944 from Ossian High School and then went into the Navy, where he served from 1944 to 1946. He retired as president of Blue Flame Gas Corp. in Bluffton. He was a former treasurer and active member of Calvary Lutheran Church. He was a member of the Bluffton Optimist Club and enjoyed playing golf, fishing and mowing. He is survived by his wife of 67 years Jackie of Bluffton along with two children, Kim Green of Ossian, and John Shaffer of LaPorte; two sisters, Nancy Barger of Craigville, and Barbara Cook of Elkhart; five grandchildren, Tod (Laura) Green of Fort Wayne, Chris (Kurt) Heffelmire of Fort Wayne, Kedric (Cheryl) Green of San Antonio, Texas, Carolyn Shaffer of Houston, Texas, and Bryce Shaffer of Valparaiso; and nine great-grandchildren. He was preceded in death by two sisters, Lucile Garton and Doris Durr. A service will be held at 4 p.m. Tuesday, Aug. 11, at Calvary Lutheran Church where Pastor Jerry O’Neal will officiate. Calling will be from 4 to 8 p.m. Monday, Aug. 10, at the Thoma/Rich, Lemler Funeral Home and one hour prior to the service Tuesday. Burial will follow at Oaklawn Cemetery in Ossian where military honors will be performed by the United States Navy Honor Guard and the American Legion Post #111 of Bluffton. Memorials may be made in Dick’s memory to the Calvary Lutheran Church. Funeral arrangements have been entrusted to the care of the Thoma/Rich, Lemler Funeral Home in Bluffton. Friends can share online condolences and memories with the family at www.thomarich.com.

The family of Richard "Dick" W. Shaffer created this Life Tributes page to make it easy to share your memories.

Send flowers to the Shaffer family.