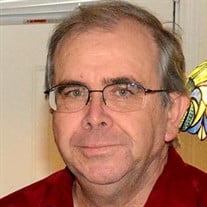 Rev. John Michael Fleming 69, of Lafayette, IN went to be with his Heavenly Father Friday morning January 10, 2020. Rev. Fleming was born April 20, 1950 in Lafayette, IN to the late John L. and Eva V. (McNabb) Fleming. His marriage to his beloved wife Debra Lynn (Blevins) Fleming took place on August 7, 1979 at the Sulphur Springs United Church of Christ. She preceded him in death on June 5, 2015. He was a 1968 graduate of Southwestern High School in Lafayette, IN. He received his BA in History from Taylor University in 1972. He was also the photographer of the yearbook in 1972. One of the most influential experiences of his life was when he studied Cultural Geography at the American Institute of Holy Land in Jerusalem, Israel from June 1972 – May 1973. In 1990 he received his Masters in Biblical Theology at Eden Theological Seminary. Rev. Fleming was a retired minister for the United Church of Christ and was blessed to serve several churches on his spiritual journey. John was an intelligent, caring, dedicated and selfless man. In his free time he could be found enjoying photography, photo restoration, reading and listening to music. He would often times be found behind the camera capturing memories of his beloved family. He also loved sharing his affinity for books with his Granddaughter Ella. Rev. Fleming is survived by two sons; Dustin Blevins of Fortville, IN, Aaron Fleming of Anderson, IN, and a daughter Tabitha (Luke) Schwyn of Bluffton, IN; two grandchildren Ella Schwyn of Bluffton, IN and Dustin A. Blevins of Ladoga, IN, a sister Maria Bougher of Lafayette, IN. A Memorial Service will be held at 4:00 pm on Saturday, January 25, 2020 at the First Church of Christ 909 W. Spring Street Bluffton, IN, where friends may call from 2 pm until the service time. Funeral arrangements have been entrusted to the care of the Thoma/Rich, Lemler Funeral Home in Bluffton. Friends can send online condolences to the family at www.thomarich.com

Rev. John Michael Fleming 69, of Lafayette, IN went to be with his Heavenly Father Friday morning January 10, 2020. Rev. Fleming was born April 20, 1950 in Lafayette, IN to the late John L. and Eva V. (McNabb) Fleming. His marriage to his beloved... View Obituary & Service Information

The family of Rev. John M. Fleming created this Life Tributes page to make it easy to share your memories.

Rev. John Michael Fleming 69, of Lafayette, IN went to be with...

Send flowers to the Fleming family.