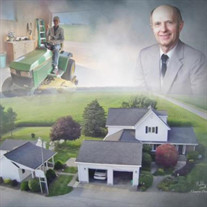 Ray G. Lesh 101, of Bluffton passed away, Feb. 12, 2022, at Bluffton Regional Medical Center. He was born September 21, 1920 at home in Rockcreek Township to Dwight and Lela (Gilbert) Lesh. Ray graduated from Rockcreek High School with the class of 1938 as class President. After graduation, Ray became a custodian at Rockcreek along with his brother Gerald. He continued to work on the family farm until he enlisted in the Army Air Corp, in February 1942. He served as an airplane sheet metal mechanic in Australia for 3 years. He returned from WWII and continued as a custodian for Rockcreek/ Northern Wells Community Schools, retiring after 50 yrs. On Jan. 27, 1946, at St. Paul Lutheran Church, Ray married the love of his life Roberta Milligan. They shared 72 years of marriage before her death on Oct. 22, 2018. Survivors include children, David E.(Robin) Lesh of Land’ O’ Lakes, FL, Linda (Bill) Schaefer of Greentown, Bruce A. (Fran)Lesh of Bluffton, Kent M. (Kelli) Lesh of Bluffton; along with 10 grandchildren,13 great-grandchildren and 4 great- great – grandchildren. He is also survived by a sister Ruth Fisher of Fort Wayne. He was preceded in death by his parents, 3 brothers; Gerald Lesh, Dale Lesh, Harold Lesh and one sister Helen Decker. Ray spent the majority of his life worshiping, learning, working and farming within one mile of his birthplace. Funeral services will be held at 3 P.M. on Friday, February 18, 2022, at the Thoma/Rich, Lemler Funeral Home in Bluffton. Burial will follow at St. Paul Cemetery in Bluffton with military honors by the United States Army Honor Guard and American Legion Post #111 Honor Guard. Visitation will be held from 1 P.M. to 3 P.M. on Friday, prior to the funeral service. Memorials may be made in Ray’s memory to the Norwell Athletic Department. Funeral arrangements have been entrusted to the care of the Thoma/Rich, Lemler Funeral Home in Bluffton. Friends can send online condolences to the Lesh family at www.thomarich.com.

Ray G. Lesh 101, of Bluffton passed away, Feb. 12, 2022, at Bluffton Regional Medical Center. He was born September 21, 1920 at home in Rockcreek Township to Dwight and Lela (Gilbert) Lesh. Ray graduated from Rockcreek High School with the... View Obituary & Service Information

The family of Ray G. Lesh created this Life Tributes page to make it easy to share your memories.

Send flowers to the Lesh family.