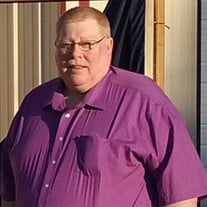 Randy J. Lane 53 of Poneto passed away at 7:55 p.m. on Thursday, March 24, 2016, at Bluffton Regional Medical Center. Randy was born July 17, 1962 in Bluffton, Indiana to Finley Herman & Celia Belle (Pederson) Lane A 1980 graduate of Southern Wells High School and graduated from Huntington College in May of 1985 with a B.S. in Elementary and Middle School Education and May of 1999 with a A.S. in Business Management. He was currently working at Fresh Thyme Farmers Market in Fort Wayne and previously worked at Ossian Community Market and at Scott’s Food Stores in Bluffton for many years. Randy also worked at the Bluffton Radio Station (Y-100) as a D.J. and the Sports Announcer for Southern Wells Sports. Randy enjoyed working with his parents many of the A.S.A. Race Tracks through the Midwest and spent a lot of time at the Anderson and Winchester Speedway. Randy enjoyed working with Robin participating in Wells County Relay for Life for 17 years. He served on the Poneto Vol. Fire Department for 35 years and was one of the first 1st. Responders in Wells County. He was a member of the Bluffton Jaycees in the early 1990’s, and loved to volunteer with the Southern Wells Band Program and help with the 4-H Program. On June 15, 1985 in Huntington, Randy and Robin E. (Pieper) Lane were married. Randy is survived by his wife Robin of Poneto, along with a daughter Rebecca (Nicole Lykins) Lane of Poneto. He is preceded in death by his parents along with an infant son. Calling Hours will be held from 12 noon to 8 p.m. on Wednesday (March 30, 2016) at the Thoma/Rich, Lemler Funeral Home in Bluffton. A service to celebrate Randy’s Life will be held at 10:30 a.m. on Thursday (March 31, 2016) with calling hours for one hour to the service. Burial will follow at Grove Cemetery in rural Poneto. Memorials may be made in Randy’s memory to the Poneto Vol. Fire Department or to Little 500 Hall of Fame Memorial. Funeral arrangements have been entrusted to the care of the Thoma/Rich, Lemler Funeral Home in Bluffton. Friends can send online condolences to www.thomarich.com.

The family of Randy J Lane created this Life Tributes page to make it easy to share your memories.

Send flowers to the Lane family.