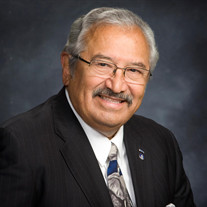 Ralph A. Garcia, 74, of Bluffton passed away on Friday morning, December 9, 2016 at Bluffton Regional Medical Center. Ralph was born on November 14, 1942 in East Chicago, Indiana to Peter M. and Emma (Flores) Garcia. He attended East Chicago Washington High School and completed training at the University of Maryland, Purdue University and graduated from the University of North Carolina. Ralph served our country in the United States Marines from 1959 to 1969 during the Vietnam Conflict, and was discharged as a staff sergeant. He worked as an intelligence officer with the Central Intelligence Agency for 32 years, retiring in 1993. Ralph moved to Bluffton from Washington D.C. in 1992. He was currently serving as the chairman of the Wells County Republicans, a position which he assumed in March of 2011. He was a member of the First United Methodist Church, Vietnam Veterans of America Chapter 698, of which he was a founding member, VFW, American Legion Post 111 of Bluffton, M.C.C.A. (Marine Corps Cryptological Association), Bluffton Masonic Lodge, Scottish Rite, and the CIA Retirees Association. Ralph was a former member of the Optimist Club, founder and past chairman of the Wells Community Boys and Girls Club, past president of Citizens Against Drug Abuse of Wells County, Community Corrections Board, past vice president of Indiana State V.V.A. Council and INSPi. Indiana Governor Mike Pence recently selected Ralph to receive the Sagamore of the Wabash award. This is the highest and most respected civilian honor in Indiana. Ralph assisted the courts and law enforcement with Spanish language translation services through his ACE Interpretations LLC, which he founded in 2001. He also was a private investigator, offering confidential investigation services as well as security and counterterrorism consulting services. He was the author of an autobiography, “Harbor Knight” which detailed his early years growing up in the harbor areas of northwest Indiana as well as his years of service in the military and with the CIA. On June 21, 1975 Ralph and Sandra (Vore) were married in Alexandria, Virginia. Survivors include his wife Sandy of Bluffton, along with sons Rene A. (Randi) Garcia of Virginia, Robert J. (Dawna) Garcia of California, and a daughter, Jacquelyn M. Garcia of Indianapolis. He is also survived by his sisters Rachelle (John) Mucha of Texas and Yolanda (Hank) Kazmierczak. Also surviving are grandchildren Chabree Martinez, Robby Garcia, Kandi Richardson, Kara Garcia, Joe Garcia, Bobby Garcia, Julie Garcia and Stormie Sloan. In addition, he is survived by 15 great-grandchildren. He was preceded in death by his parents and a son, Ralph J. Garcia, a brother, Richard S. Garcia and a sister, Kathleen Ortiz. A Patriotic Service to Celebrate Ralph’s Life will be held at 10:30 on Saturday (December 17, 2016) at the First United Methodist Church in Bluffton. Pastors Steve Bard and Jerry Blevins will officiate. Calling hours will be held from 2 to 8 on Friday (December 16, 2016) at the Thoma/Rich, Lemler Funeral Home in Bluffton. A Masonic Memorial Service will take place at 8 p.m. on Friday, at the conclusion of calling hours. Memorials may be made in Ralph’s memory to the Wells Community Boys & Girls Club. Ralph’s arrangements have been entrusted to the care of Thoma/Rich, Lemler Funeral Home. Friends can send online condolences to the family at www.thomarich.com.

The family of Ralph A Garcia created this Life Tributes page to make it easy to share your memories.

Ralph A. Garcia, 74, of Bluffton passed away on Friday morning,...

Send flowers to the Garcia family.