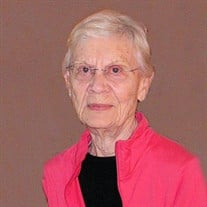 Phyllis E. Biberstine, 92 of Bluffton, passed away Friday, July 9, 2021 at River Terrace in Bluffton. Phyllis was born on January 4, 1929, in Faribault, Minnesota to Victor and Alice (Johnson) Jensen. She graduated from Faribault High School in 1946 and from Northwest Institute of Technology in 1947. Phyllis was a lifelong member of the First English Lutheran Church of Faribault, MN, and the Calvary Lutheran Church in Bluffton. She worked for many years as a Medical Technologist at the Wells Community Hospital. She was also a past president of Psi Iota Xi. Phyllis Elaine (Jensen) and V. Ted Biberstine were married on October 2, 1949 in Faribault, Minnesota. They were married for 71 years. Ted proceeded her in death in October of 2020. Phyllis, with Ted, enjoyed spending time fishing, traveling on their motorcycle, and in the woodworking shop. Walking the River Greenway or in the state park hand in hand with Ted will be a lasting image for many. She is renowned for her baking skills, and many will miss her cookies, as well as her apple and lemon meringue pies. Her true calling was to be a wife, mother, and grandmother, gently helping when needed and supporting all through events big and small. Her kind nature and her ever welcoming and accepting presence created space for everyone in her family’s life to think of and refer to her as “mom” or “grandma.” She leaves behind more children and grandchildren than she may legally claim. Survivors include her children; V. Ked (Terry) Biberstine of Uniondale, Scott (Debbie) Biberstine of Bluffton, Kris (Dave) Troxel of Fremont, Tim (Jeannie) Biberstine of Bluffton, and Cliff (Sandy) Biberstine of Bluffton. Phyllis was a proud Grandmother to 8 grandchildren; Ashley Biberstine, Zachary (Kimberley) Biberstine, Quinn (Joe VanZant) Biberstine, Clint (Juniper) Troxel, Blake (Nike) Troxel, Alex (Joy) Troxel, Jessica (Jacob) Meeks, Brittany (Drew) Kellogg and 13 great-grandchildren; Ember Biberstine, Sam Grubisich, Liam Grubisich, James VanZant, Henry VanZant, Sage Troxel, Rowan Troxel, Tayo Troxel, Kaylee Meeks, Carter Meeks, Cora Meeks, Tripp Kellogg and Piper Kellogg. She is also survived by 2 sisters-in-law, BeBe Jensen of Faribault, MN and Doris (Biberstine) Woodward of Warsaw. Phyllis was preceded in death by her parents, a grandson, Casey A. Biberstine, a brother, Gaylen Jensen and a sister, Lois Anderson. Private family services will be held with burial at Fairview Cemetery in Bluffton. Memorials may be made in Phyllis’s memory to The River Greenway, payable to the Wells County Foundation, or The Friends of the State Park and should be sent to the funeral home. Funeral arrangements have been entrusted to the care of the Thoma/Rich, Lemler Funeral Home in Bluffton. Friends can send online condolences to the Biberstine family at www.thomarich.com.

The family of Phyllis E. Biberstine created this Life Tributes page to make it easy to share your memories.

Send flowers to the Biberstine family.