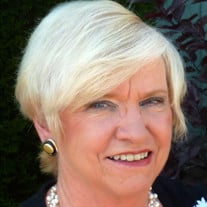 Patricia “Patty” Christianson 73, passed away on Tuesday morning, October 27, 2015, at her residence, surrounded by her family. Patty was born on January 31, 1942 in Bluffton to Woodrow E. & Maxine L. (Lesh) Spaid. A lifelong resident of Wells County, she graduated from Bluffton High School in 1960. Patty worked at the Wells County Auditor’s Office for 14 years followed by 18 years at the Wells County Office of Family & Children. After retirement, she continued to work part-time at Panos Free Clinic and the Bluffton Street Fair Association. She was a 50+ year member of the First United Methodist Church in Bluffton. On September 9, 1961 in Bluffton, Patty married Jerry Christianson. They shared 54 years together, and Jerry survives along with a son Terry Christianson and a daughter Vicki (Steve) Cale, both of Bluffton. She was a loving grandma to three grandchildren; Kaylee (Joe) Andrews, Cameron Gerber and Ryland Christianson a great-grandson; Jace Andrews and three step-grandchildren; Ryan Cale, Matt Cale and Abby Hissong along with six step-great-grandchildren. Patty is also survived by a sister Suzanne (Charles) Murray of Carmel along with nieces and nephews. A service to celebrate Patty’s life will be held at 10 a.m. on Saturday, October 31, 2015, at the Thoma/Rich, Lemler Funeral Home in Bluffton. Pastor Steve Bard will officiate. Burial will follow at Six Mile Cemetery in Bluffton. Calling hours will be held from 1 p.m. to 8 p.m. on Friday at the funeral home and for one hour prior to the service on Saturday. Memorials may be made in Patty’s memory to Family LifeCare of Berne or First We Care Program at the First United Methodist Church. Funeral arrangements have been entrusted to the care of the Thoma/Rich, Lemler Funeral Home in Bluffton. Friends can share memories and send condolences to the family at www.thomarich.com.

The family of Patty Christianson created this Life Tributes page to make it easy to share your memories.

Send flowers to the Christianson family.