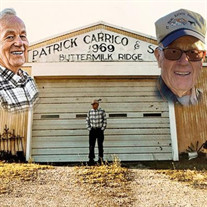 Patrick “Pat” W. Carrico, 81 of rural Ossian, passed away on Sunday, December 19, 2021, at Adams Woodcrest in Decatur. Pat was born on March 17, 1940 in Loretta, Kentucky to Robert & Helen (Baumgartner) Carrico. He graduated from Battle Ground High School with the class of 1959 and served in the United States Army from 1963 to 1965. On November 2, 1963 at Fort Bragg, NC., Pat and Shirley (Decker) were married. When he was honorably discharged from the Army in 1965, Pat & Shirley moved to Wells County and lived in rural Ossian for many years. After 31 years of marriage, Shirley preceded Pat in death on June 1, 1994. Pat worked as a maintenance supervisor for General Electric in Fort Wayne for 30 years retiring in 1995. He bought and sold livestock for many years. Pat worked for the Steffen Group for many years and enjoyed going to and working any type of auction. He was the mayor of Hardee’s in Bluffton and he loved visiting with anyone who would come in to visit and solve the problems of the world over coffee and breakfast. Survivors include his children; Marissa Whitesell of Ossian, Theresa (Jeff) Radabaugh of Van Wert, Ohio, and Bill (Heidi) Carrico of Decatur. He was a loving “G-Pa” to his10 grandchildren; Kylie Sommer, Connor Whitesell, Shae Carrico, Bryce Turner, Holly Eischen, Brett Radabaugh, Curtis Radabaugh, Caleb Carrico, Joel Carrico and Megan Carrico and 8 great-grandchildren with one on the way. He is also survived by his siblings; Wilma (Jim) Pilotte of Lafayette, Richard Carrico of Lafayette and Wanda Bloyd of Cincinnati. Pat is preceded in death by his parents, wife Shirley a daughter, Lisa A. Carrico and siblings; Patricia Focco, Roy Carrico, Sir John Carrico, Albert Carrico and Tommy Carrico. Calling hours for Pat will be held from 2 P.M. to 8 P.M. on Thursday (Dec. 23, 2021) at the Thoma/Rich, Lemler Funeral Home in Bluffton and for one hour prior to the service. A service celebrating Pat’s life will be at 11 A.M. on Friday (Dec. 24, 2021) at the funeral home with Jeff Lemler and Brandon Steffen officiating. Burial will follow at the Apostolic Christian Church Cemetery in Adams County. Memorials may be made in Pat’s memory to the Apostolic Christian Church – Sunday School. Funeral arrangements have been entrusted to the care of the Thoma/Rich, Lemler Funeral Home in Bluffton. Online condolences may be made at www.thomarich.com.

The family of Patrick "Pat" W. Carrico created this Life Tributes page to make it easy to share your memories.

Send flowers to the Carrico family.