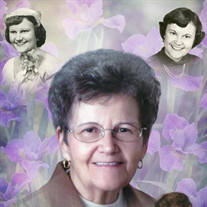 Patricia Joan “Patty” Moser 87, of Bluffton passed away Tuesday evening September 28, 2021, at Christian Care Retirement Community. Patty was born in Bluffton on April 10, 1934 to Ralph and Maude Madelia (Little) Kiefer. She attended Bluffton schools and graduated in 1952. During her high school years, she babysat for several Bluffton residents and worked part-time at the Deam and Harris Drug Store. Upon graduation from high school, she took a clerical position with Lincoln Life Insurance Company in Fort Wayne. On November 19, 1955, Patty married Virgil Moser and they moved to Fort Wayne. Patty continued to work at Lincoln Life until 1959 when their son Gregory was born. She then became a stay-at-home mom and housewife. In 1964, their son Gary was born, and she continued to be a stay-at-home mom. In 1967, the family moved to Greensburg, IN due to Virgil’s job change. In Greensburg, Patty made a lot of new friends and became active in PTA, church groups and card clubs. After the boys were in high school, she worked as a teacher’s aide at the local middle school for a few years. She also worked in a men’s clothing store for a while. In 1986, the family moved back to Bluffton. In Bluffton, Patty became active in church activities, joined a card club and was a full-time housewife. She was an immaculate housekeeper and really seemed to enjoy working at keeping the house spotless. She once was accused by a neighbor of wearing out the concrete driveway that had deteriorated over time, Patty would sweep away the chips of concrete. Survivors include her husband Virgil, two sons, Gregory A. (Julayne) Moser of Lafayette, IN and Gary L. (Dianne) Moser of Taylor Mill, KY. She is also survived by three grandchildren, Christopher Moser, Joey Moretti and Lauren Hawley, along with a sister Betty (Hugh) Watters of Bluffton. She was preceded in death by her parents and a son Steven Moser. The family requests that guests wear a mask for Patty’s visitation and service. Funeral Services for Patty will be at 1pm on Monday, October 4, 2021, at the Thoma/Rich, Lemler Funeral Home in Bluffton with Dr. Bryson “Gene” Bell officiating. Visitation will be from 11am to 1pm prior to the service at the funeral home. Burial will follow in Elm Grove Cemetery. Friends wishing to watch Patty’s service can do so from the safety of their home, utilizing a Zoom Meeting. You can login using the Zoom Meeting I.D. # 896 1212 4986 and you can login after 12:45 P.M. on Monday, October 4, 2021. Memorials may be made to the Good Samaritan Caregiver Program at Christian Care or a charity of the donor’s choice. Funeral arrangements have been entrusted to the Thoma/Rich, Lemler Funeral Home. Friends can send online condolences to the Moser family at www.thomarich.com.

The family of Patricia Joan Moser created this Life Tributes page to make it easy to share your memories.