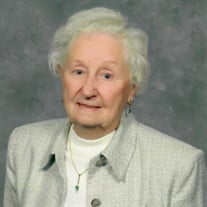 Patricia Mary Huffman, 93 of Bluffton and a longtime resident of Angola, passed away early Thursday morning, November 18, 2021, at Christian Care Retirement Community in Bluffton. She was born on August 15, 1928 in Toledo, Ohio to Hyacinth & Mary (Tuite) Roach. Patricia graduated from Central Catholic High School in Toledo. On September 4, 1950 in Toledo, Ohio, Patricia married Lawrence Huffman. They shared 43 years of marriage together before he preceded her in death in 1993. She was a longtime parishioner of St. Anthony’s Catholic Church in Angola, Indiana where she served on the church Alter & Rosary Society, Prayer Shawl Ministry and as a Eucharistic Minister. Patricia also was active in Angola’s Women’s Club, Psi Iota Xi in Angola, volunteered for Meals on Wheels and at Cameron Hospital. She enjoyed playing bridge with her bridge clubs and was part of a Progressive Supper Club. Everyone was always welcome in her home and were treated like family. She loved to serve, her Lord, church and community. Survivors include her children; Keith (Suzanne) Huffman of Bluffton, Robert (Margie) Huffman of Tampa, FL., Anita (Ron) Bates of Fort Wayne, Pamela (Kerry) Kramp of Buffalo, MN., Jean (Tom) Leas of Indianapolis, IN. and Lawrence Huffman of Bryan, OH, along with 15 grandchildren and 23 great-grandchildren. She is preceded in death by her parents, husband Lawrence, a daughter, Valerie Huffman along with a brother, Robert Roach. A private family mass will be held at St. Anthony’s Catholic Church in Angola, Indiana. Burial will take place next to her husband at Circle Hill Cemetery in Angola. A proud Irish Woman, Patricia’s wish was that her family and friends would gather and toast to her accomplishments and overlook her shortcomings, just as she would have done for you! Memorials may be made to Visiting Nurse & Hospice of Fort Wayne or the charity of the donor’s choice and can be sent to the funeral home. Mrs. Huffman’s arrangements have been entrusted to the care of the Thoma/Rich, Lemler Funeral Home in Bluffton. Friends can send online condolences to the Huffman family at www.thomarich.com.

Patricia Mary Huffman, 93 of Bluffton and a longtime resident of Angola, passed away early Thursday morning, November 18, 2021, at Christian Care Retirement Community in Bluffton. She was born on August 15, 1928 in Toledo, Ohio to Hyacinth... View Obituary & Service Information

The family of Patricia M. Huffman created this Life Tributes page to make it easy to share your memories.

Patricia Mary Huffman, 93 of Bluffton and a longtime resident...

Send flowers to the Huffman family.