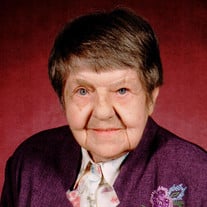 Nina J. Johnson 92 of Markle passed away at 4:35 p.m. Friday (March 25, 2016) at Heritage Pointe in Warren. She was born on July 1, 1923 in Wells County to James Lewis & Addie (Davison) Gibson. She graduated from Lancaster High School in 1941 and worked with her husband Paul on the family farm and dairy. She was a former member of the Eastern Star in Bluffton and Rockford Friendship Home Econ. Club for many years. Nina was a member of Boehmer United Methodist Church, Liberty Center and a former member of Emmanuel Church in Rockford. On June 6, 1943 in Wells County, Nina & Paul E. Johnson were married. They enjoyed 65 years of marriage together before he preceded her in death on December 20, 2008. Survivors include her children: Karen Hunnicutt of Warren, Gary P. (Judy) Johnson of Bluffton, Jerry E. Johnson of Markle and Steven L. Johnson of Berne along with five grandchildren: Heath Hunnicutt of Seattle, WA., Lisa Hunnicutt of Indianapolis, IN, Brian (Kerry Ann) Johnson of Fishers, Brad (Caryn) Johnson of Bluffton, Cameron Masterson of Bluffton, along with nine great-grandchildren: Brooke, Kellyn and Patrick Johnson, Ashley, Tanner, Caleb, Landon and Kyan Johnson and Sierra Hunnicutt She was preceded in death by an infant daughter Paula Johnson and three sisters: Wanda Fredrick, Bertalene Walsh and Maxine Gibson. Calling hours will be held on Monday from 2 p.m. to 8 p.m. at the Thoma/Rich, Lemler Funeral Home in Bluffton. A service to celebrate Nina’s life will be at 10 a.m. on Tuesday (March 29, 2016) at the funeral home with calling for one hour prior to the service. Pastor Barry Humble will officiate. Burial will follow at Mossburg Cemetery in Liberty Center. Memorials may be made to the Boehmer United Methodist Church. Funeral arrangements have been entrusted to the care of the Thoma/Rich, Lemler Funeral Home in Bluffton. Friends can send online condolences to the family at www.thomarich.com.

The family of Nina J. Johnson created this Life Tributes page to make it easy to share your memories.