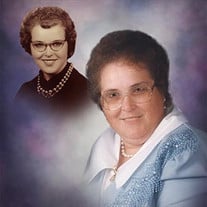 Mildred “Millie” M. Falk, age 73, went to be with her beloved husband on May 25, 2019 at Lutheran Hospital in Fort Wayne after a very brief illness. She was a resident of Bluffton for many years. Millie was born on August 21, 1945 in Maryville, Tennessee to Avery and Lindy “Helen” (Burns) Gregory. In adulthood, Kelsee York became her stepfather and she considered him to be her dad. Her family moved to Michigan in the 1950s and she graduated from Central High School in Flint, Michigan. In 1986, she met and married her soulmate, Dale E. Falk, and was a homemaker for many years. She enjoyed traveling with Dale, spending time with family, watching game shows and legal dramas on TV, and playing games. She will be remembered for being an attentive and doting wife who was very kind to everyone. She was described as “One of the sweetest people I’ve ever known.” She will be sorely missed by many. She is survived by her children, Sherry (Jack) Holder of Georgia, Peggy (Bill) Griswold of Wichita, Kansas, Jeff (Jody) Falk of Huntington, Indiana; Brenda (Bret) Parker of Huntington, Indiana, and Belinda (Larry) Thacker of Huntington, Indiana; several grandchildren including Krystle (Brad) Pittard of Decatur, Indiana; several great-grandchildren; four brothers, three sisters, and numerous nieces and nephews. Millie was preceded in death by her parents, brother Clay Burns of Tennessee, daughter Shelly Gregory of Decatur, Indiana, and husband Dale, who passed away on May 6, 2019. Funeral services will be held at 11 A.M. on Friday (May 31, 2019) at the Thoma/Rich, Lemler Funeral Home 308 W. Washington St. in Bluffton, with Chaplin Denise Schwaberow officiating. Burial will follow at Gardens of Memory in Marion, Indiana. The family will greet friends from 9 A.M. to 11 A.M. prior to the funeral service on Friday at the funeral home. Peggy Griswold would like to extend her sincere gratitude to the staff at Lutheran Hospital and Signature Care in Bluffton for their compassion, guidance, and loving care during this difficult time. Preferred memorials can be made to Heart to Heart Hospice in Fort Wayne. Funeral arrangements have been entrusted to the care of the Thoma/Rich, Lemler Funeral Home in Bluffton. Friends can send online condolences to the family at www.thomarich.com

The family of Mildred "Millie" M. Falk created this Life Tributes page to make it easy to share your memories.

Send flowers to the Falk family.