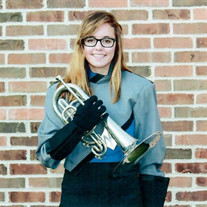 Michaela Gabriel Adam, 17, of Markle passed away in a tragic car accident on February 14, 2018. Born on January 25, 2001, in Austin, Texas, she was a quirky, no-nonsense girl with a great deal of potential. She took the hardest classes Norwell High School had to offer, all while carrying a 3.9 GPA, and was a member of the National Honor Society. She may have had a small circle of friends, but she had a ripple effect on the world. Whether playing the French horn in concert band, the trumpet in pep band, or marching her mellophone for her beloved Norwell Marching Knights, she used music as her creative outlet. Michaela’s life was not without struggle, but she used these experiences constructively to make the world better for others. She was a proponent for equal rights, feminism, and social justice. She was an avid writer, publishing small novellas on Wattpad, garnering a fan base who identified with her realistic characters. In her spare time, you could find her with her squad, playing card games like Magic the Gathering, attending anime conventions, or just in philosophical conversation. Michaela had her life completely planned out, taking the SAT as Junior and ready to apply Early Decision to Reed College in Portland, Oregon. As she had a fascination with history, sociology, and biochemistry, she planned to earn a Ph.D. in Anthropology. But as with the best-laid plans, she was taken from this world too soon. She is survived by her parents, Brandon and Shelley Monticue of Markle and Eric and Tara Adam of San Antonio, TX, as well as sisters Angelica and Julia, at home. She is also survived by her maternal grandparents, Michael and Kathryn Thompson of House Springs, MO, Michael and Marilyn Monticue of Bluffton, and David and Cheryl Brest of Lake Havasu City, AZ; paternal grandparents Edward and Patricia Adam of Navasota, TX, and Thomas and Judy McMillan of San Antonio, TX; great-grandparents, Emily Thompson of Newburgh, IN, and Melda Monticue of Bluffton; uncles Justin Thompson of House Springs, MO, Michael (Stacey) Adam of Plano, TX, Kyle McMillan of Austin, TX. and Tim (Doung) Wagner of Japan; aunt Kara (Ray) Brown of Kopperl, TX; numerous extended family and friends; and her boyfriend of 18 months, Aidan Berry of Zanesville. She is predeceased by her aunt, Kristine Thompson. Visitation will be held from Sunday, February 18, 2018 from 2:00-6:00 P.M. at the Thoma/Rich, Lemler Funeral Home in Bluffton, followed by a rosary at 6:00. Service will be at 10:30 A.M. Monday, February 19th, at the funeral home with visitation one hour prior. Pastor Jason Frisch will officiate. Burial will follow at Elm Grove Cemetery in Bluffton. In lieu of flowers, donations may be made toward a scholarship to be set up in Michaela’s honor for members of the Norwell Marching Knights. Funeral arrangements have been entrusted to the care of the Thoma/Rich, Lemler Funeral Home in Bluffton. Friends can send online condolences to the family at www.thomarich.com.

Michaela Gabriel Adam, 17, of Markle passed away in a tragic car accident on February 14, 2018. Born on January 25, 2001, in Austin, Texas, she was a quirky, no-nonsense girl with a great deal of potential. She took the hardest classes Norwell... View Obituary & Service Information

The family of Michaela Gabriel Adam created this Life Tributes page to make it easy to share your memories.

Michaela Gabriel Adam, 17, of Markle passed away in a tragic...

Send flowers to the Adam family.