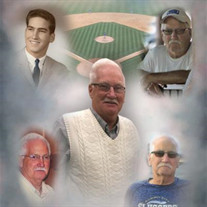 Michael W. Moore, 69 of Warren, IN died August 7, 2019 at Lutheran Hospital in Fort Wayne from complications of acute myeloid leukemia. Michael was born on March 16, 1950 in Columbus, OH to William Hershel & Hazel Roberta (Tewell) Moore. Michael graduated from North High School in Columbus, OH. After graduation, he attended Huntington University, and graduated from the Indiana Police Academy in Pendleton, IN. He was employed as a sales representative at Puretek in Albion, IN. He worked for National Oil & Gas in Bluffton for many years. Michael was a deputy police officer in Warren, and pastored in Dillman and Marion, Indiana and Convoy, OH. He was a bowler and past president of the Wells County 4-H Association. He held many other positions at the 4-H park. His favorite pastime was attending all his grandchildren’s activities, such as ball games, attending livestock shows at their local and state fairs and school activities. Mr. Moore is known to many as a coach and mentor for softball, baseball and the 4-H programs for many years. Mr. Moore married Jeanette Faye (Offutt) on April 11, 1969 in Columbus, OH. They celebrated 50 years together, and she survives in Warren. Other survivors include three sons; Michael Dean Moore of Poneto, Mark Daniel (Heather) Moore of Warren and Matthew David (Carrie) Moore of Bluffton, along with nine grandchildren; Wesley, William, Brooklyn and Bailee of Poneto, Koltan, Kenja and Kaine of Bluffton, and Cameron & Caden of Warren. He is also survived by a brother Joe Moore of KY and sister-in-laws; Sherry Moore of Columbus, OH and Eva Siddens of Mt. Zion, IN, along with his in-laws; Jerry & Janice Harpool of Strasburg, VA, Gary & Barbara Wycuff of Westerville, OH, James & Bernice Kiser of Hinckley, OH, several nieces, nephews, great nieces & nephews and numerous other relatives. Mr. Moore is preceded in death by his parents, a sister Jean A. Moore and brothers Francis A., Thomas L. and Kenneth A. Moore, his mother & father-in-laws Denver & Permelia Offutt. Calling hours will be held from 2 to 8 P.M. on Monday (August 12, 2019) at the Thoma/Rich, Lemler Funeral Home in Bluffton. A service to celebrate Michael’s life will take place at 10:30 on Tuesday (August 13, 2019) at the funeral home with calling for one hour prior to the service. Jeff Lemler will officiate. Burial will follow at Mossburg Cemetery in Liberty Center. Memorials may be made to the Wells County 4-H – Show Ring Memorial Fund and should be made through the funeral home. Funeral arrangements have been entrusted to the Thoma/Rich, Lemler Funeral Home in Bluffton. Friends can send online condolences to the family at www.thomarich.com.

The family of Michael W. Moore created this Life Tributes page to make it easy to share your memories.

Send flowers to the Moore family.