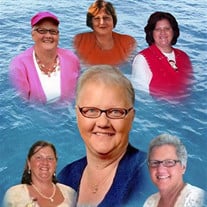 Melissa Collins, 55, of Bluffton, passed away early Friday morning, February 22, 2019, at Signature Health Care in Bluffton. Melissa was born on March 11, 1963 in Bluffton to William K. “Bill” & Sharon E. (Gregg) Gentis. She graduated from Bluffton High School with the class of 1981 and in 2015, received as A.S of Science degree in Biblical Studies from The Bluffton Bible College. She worked for BKM Real Estate and owned/operated Designer Drapes, where she made drapery for many years. Melissa also owned/operated Cute As A Button, a daycare facility in Bluffton for 10 years, retiring in 2017. A member of First Church of Christ, she was also very active in the Women’s ministries in the church. On September 12, 1992 in Bluffton, Melissa married Joseph L. “Joe” Collins. Survivors include her husband Joe of Bluffton and children; Josh (Jenny) Collins of Bluffton, Alan (Sadie) Elliott of Leo, Andrea (Michael) Balkcom of Cameron, NC, Abby (Joe) Holloway and Maria (Jackson) Bates, both of Bluffton. She was a loving grandma to 9 grandchildren; Cole and Connor Collins, Olivia & Evan Elliott, Kameron, Gunner & Hunter Holloway, Raleigh & Evie Bates. Melissa is also survived by her parents, Bill & Sharon Gentis of Bluffton and siblings; Kurt (Susie) Gentis, Sheila (Dave) Herdman, Kelly (Robin) Gentis and Kerry (Michelle) Gentis, and a brother-in-law, Dan Dunwiddie, all of Bluffton. Melissa is preceded in death by a sister, Ann Dunwiddie in 2017, and two nieces; Jaime Gentis and Grace Rinn. Funeral services will be held at 10:30 A.M. on Monday (February 25, 2019) at the First Church of Christ in Bluffton, with calling for one hour prior to the service. Rev. Arley Higginbotham and Pastor Brandon Kelley will officiate. Burial will follow at Six Mile Cemetery in Bluffton. Calling hours will be held from 12 Noon to 6 on Sunday, (February 24, 2019) at the Thoma/Rich, Lemler Funeral Home in Bluffton. Memorials may be made in Melissa’s memory to Friends Who Care Cancer Relief Foundation. Funeral arrangements have been entrusted to the care of the Thoma/Rich, Lemler Funeral Home in Bluffton. Friends can send online condolences to the family at www.thomarich.com.

The family of Melissa Collins created this Life Tributes page to make it easy to share your memories.

Send flowers to the Collins family.